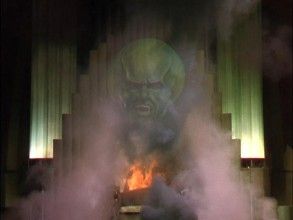 Toto, I have a feeling we’re not in Kansas anymore. We’re in California, where the winter weather is in the 70s and the high taxes are imposed by the Great and Powerful Oz.

Writing in Al Jazerra[1], David Cay Johnston said Kansas’ tax cuts hurt it, while California was helped by its $7 billion in tax increases, which voters approved with Proposition 30[2] in 2012. He is an investigative reporter, Pulitzer Prize winner and professor of business, tax and property law of the ancient world at the Syracuse University College of Law.

“Ever since economist Arthur Laffer drew his namesake curve on a napkin for two officials in President Richard Nixon’s administration four decades ago, we have been told that cutting tax rates spurs jobs and higher pay, while hiking taxes does the opposite.

“Now, thanks to recent tax cuts in Kansas and tax hikes in California, we have real-world tests of this idea. So far, the results do not support Laffer’s insistence that lower tax rates always result in more and better-paying jobs. In fact, Kansas’ tax cuts produced much slower job and wage growth than in California.

“The empirical evidence that the Laffer curve is not what its promoter insists joins other real-world experience undermining the widely held belief that minimum wage increases reduce employment and income.”

Let’s just deal with that.

First, as I seem to be the only one to have pointed out, California taxes actually have declined in recent years, not risen. I wrote in July[3]:

Now, guess what? The entire general-fund budget in 2013 for Kansas was $6.2 billion[6] — roughly equal to the California tax cut.

So anything good Johnston says about tax policy in California has to be assigned to the tax cut here, not to an increase that didn’t happen.

True, from a Lafferite perspective, things would have been even better had Prop. 30 not passed. But in life, you take what you can get. And Gov. Jerry Brown, who campaigned for voters to pass Prop. 30, reminded us in October[7], “I said when I campaigned for Prop. 30 that it was a temporary tax, so that’s my belief, and I’m doing everything I can to live within our means.”

That’s highly encouraging to California businesses, which can look to an infusion of investments — Prop. 30 mainly is a tax on the wealthy — in a couple of years when the money is shifted back from the wasteful government sector to the productive private sector. Much more than government, businesses are forward looking.

If that happens, and Prop. 30 expires, taxes will have dropped $13 billion under Brown, the biggest tax cut of any state in history.

And if in 2016, Brown makes a fourth bid for president, all that will make for a compelling part of his “California is back [because of me]” narrative. Indeed, the Kansas governor’s own victory could put him in contention for the GOP nomination. How about a 2016 contest of Brown vs. Brownback?

By the way, it was Laffer who designed[8] Brown’s supply-side, flat-tax proposal, a 13 percent income tax on everyone, during the governor’s 1992 presidential bid. So Brown, hardly the “right wing” partisan Johnston thinks goes for cutting tax rates, is well aware of supply-side economics.

I recently reviewed, “The Pillars of Reaganomics:[10] A Generation of Wisdom from Arthur Laffer and the Supply-Side Revolutionaries,” edited by Brian Domitrovic. 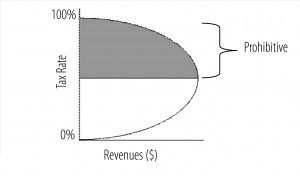 “Laffer’s model illustration looks like a bullet pointed to the right[11]. It shows that the government collects no revenue when tax rates are at 0 or 100 percent. As tax rates rise, revenue does until reaching an unspecified rate that Laffer calls “prohibitive.” Above that level, as tax rates rise, government revenues fall off quickly.”

But this seems pretty obvious, doesn’t it? If the income tax were 100 percent, would you work? Of course not, except on the black market. What would be the point? (The Laffer Curve graphic he kindly linked to is from Laffer’s own site, and is reproduced nearby.)

“Laffer qualifies many of his assertions about changes in tax rates, noting that tax cuts may result in less government revenue, for example.”

Right. As you move down the lower part of the Laffer Curve, the white area, both tax rates and revenues drop. Taxes at a 0 percent rate obviously raise 0 dollars. (Unless the good professor volunteers to send the treasury a check.) 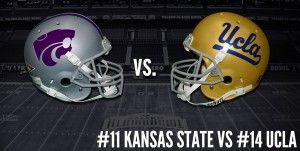 “But on one issue from the Laffer curve, he is absolute[12]:

“Tax rate cuts will always lead to more growth, employment and income for citizens, which are desirable outcomes leading to greater prosperity and opportunity.”

This is where the Sunflower State vs. Golden State rivalry comes in, an economic version of the Kansas State Wildcats vs. the UCLA Bruins at the Valero Alamo Bowl [13]on Jan. 2.

“Is this absolute rule right?” Johnston asked. “Let’s consider the tax law changes in Kansas and California that took effect at the start of last year [2013; although Prop. 30 actually was retroactive to Jan. 1, 2012].”

He recounted how Gov. Sam Brownback ran for office in 2010 “to turn the state into a low-tax paradise and eventually to eliminate the state income tax….The Brownback administration paid Laffer $75,000[14] for his advice on the tax cuts.” Effective in 2013, “The bottom rate was cut from 3.5 percent to 3 percent. The top rate, which starts at $15,000 of taxable income for singles, was lowered from 6.25 percent to 4.9 percent.”

Imagine that! A politician who actually kept the campaign promise under which people elected him. Indeed, Brownback last month was re-elected, despite concern that his tax cuts caused budget deficits. The Kansas City Star reported:

“After he addressed his supporters, Brownback told The Star he looked forward to the next four years.

“The win, experts said, clears the way for Brownback to pursue those goals and more, such as further income tax cuts, more reductions in state spending, expansion of school choice and limits to state regulations on business. He might even get more aggressive on social issues.

“‘Brownback will take this as confirmation that he is steering the state in the correct direction. Indeed, the fact that he has won suggests the voters agree,’ said Joe Aistrup, a political science professor at Auburn University who has written a book on Kansas politics. ‘He will even move even more directly to implementing his red-state vision.’”

Brownback also plans on reducing Kansas’ deficits by cutting waste, which as everywhere in government is larded as thick as on a holiday hog.

And with Brownback and his tax cuts now firmly entrenched, Kansas businesses can plan their prosperous futures. I suspect, just as Laffer’s theory predicts, the prosperity will increase the tax base, thus providing higher taxes which also will close the deficit.

“The same month the Kansas tax rate cuts began, tax rates rose in California,” Johnston wrote. But as we have seen, looked at in a slightly larger perspective, California’s taxes dropped $6 billion — which helped that other tax-cutting governor, Jerry Brown, also win re-election. 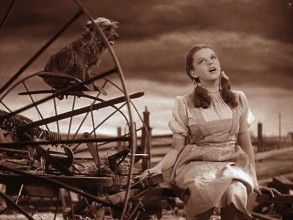 He also could have cited how California’s bond rating was upgraded[15] right after voters just passed Proposition 2, the “rainy day fund” initiative.

Except that, despite these changes, Kansas still has higher bond ratings. California’s S&P bond rating rose to “A-plus” from “A.” S&P defines[16] that as, “Strong capacity to meet financial commitments, but somewhat susceptible to adverse economic conditions and changes in circumstances.”

Kansas’ S&P rating, from the August downgrade, went to “AA-minus” from “AA.” S&P defines that as — note the lack of a cautionary note — “Very strong capacity to meet financial commitments.”

As to Moody’s, it rates California’s bonds “Aa3[17],” but Kansas’ higher, at “Aa2.” Both “Aa” ratings are defined as[18], “Obligations rated Aa are judged to be of high quality and are subject to very low credit risk.”

On bonds, Johnston summarized, “California’s credit rating improved. The Golden State can borrow at lower rates, while Kansas will have to pay more to compensate investors for the risk that the Sunflower State will lack the revenue to repay its debts.”

Except that Kansas’ rates still are lower that California’s and it will “have to pay” less overall “to compensate investors.”

Folks care most about jobs. Johnston compared the two states:

He provided a nice graph: 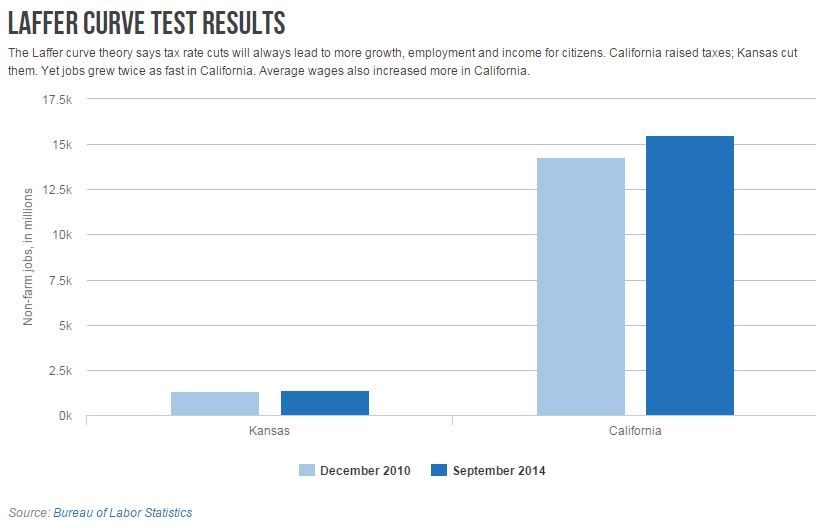 According to Businessweek[20], “In the U.S. a full-employment economy more realistically is closer to the 3 percent to 4 percent mark….”

So Kansas is close to “full employment.” Those without jobs basically are between jobs. Or looking for Dorothy.

Employment can’t go up faster because everybody already has jobs. It’s like when your teenage son stops growing at 18, you don’t complain that he doesn’t keep rising to 10-feet tall.

So for working stiffs in Kansas, the Laffer-Brownback tax cuts worked!

One area Kansas seems to lag is in compensation. Johnston wrote, “Compensation in California also grew faster than in Kansas. California’s average weekly wage of $1,165 in the first quarter of this year was 13.4 percent higher than in mid-2012, while the Kansas average of $840 was up only 10.1 percent.”

Except that, for the second year in a row, according to the U.S. Census Bureau[21], California suffers the nation’s highest poverty rate when the cost of living in this incredibly expensive state is taken into account. Part of the reason is that California’s high taxes, with the shocking 9.3 percent income tax rate digging in at about $55,000 of earned income, also gouge the middle class.

A shocking 8.9 million of our 38 million residents languish in poverty, or 23.4. That 8.9 million is three times Kansas entire population [22]of 2.9 million.

By contrast, just 11.8 percent of Kansans are in poverty, less than half California’s percentage. 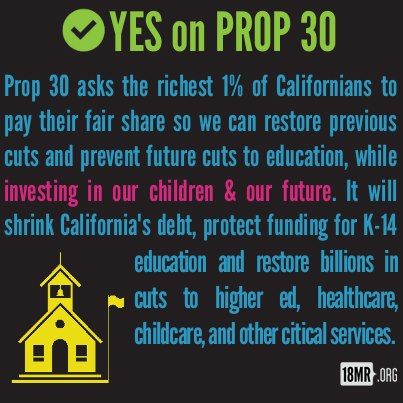 Taxes go somewhere. The biggest item in both states’ budgets is education. In California, we even have an initiative, Proposition 98[23], which mandates about 40 percent of general-fund taxes go to public schools. And the Prop. 30 tax increase largely was justified as benefiting K-12 school kids.

So, for all California spends on education, and all the high taxes Johnston says benefit us, our kids’ score worse than in low-tax Kansas.

“California students performed about the same in reading and math on this year’s National Assessment of Educational Progress as they did in 2011, ranking among the 10 lowest performing states in the country.

I’ll skip Johnston’s discussion of minimum-wage boosts, which he thinks will help California. With the wage going up even further [27]due to initiatives in four states and three California cities, and more to come in 2016, we’ll soon have some really good comparisons on that. (My earlier articles on it are listed here.)

But just one more thing, as the late Steve Jobs used to say. Johnston wrote, “Tax hikes did not hurt California job growth because the taxes were not on jobs but on high incomes.”

Once again — strike up the band — taxes have gotten lower in California. But as to the Prop. 30 income taxes only on “high incomes,” when “the rich” pay more in taxes, all of us suffer, too. Because it’s largely the rich who use their money to invest in creating new businesses and jobs, as well as fund numerous charities.

“Ultimately, real world results trump theory. Actual changes in the number of jobs and what they pay should be used to set policy, not ideology, assumptions and expectations…. Time will tell. The important thing is that policy should follow the facts, no matter where they go.”

Correction: This piece originally had Kansas’ Moody’s rating downgraded to Aa1; in it was fact one notch lower, at Aa2, to which the text has been changed. We regret the error. We were informed of this by David Jacobson, AVP, Communications Strategist-Public Finance Group at Moody’s Investors Service. He wrote, “In spring of this year we downgraded Kansas from Aa1 to Aa2, and in June we upgraded California from A1 to Aa3.  So the correct rating on Kansas is Aa2, and although the states are moving in different directions, Kansas does remain one notch higher than California.  Our median state rating is Aa1.”