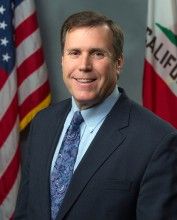 [1]A Republican lawmaker wants to turn money for California’s high-speed rail project into funding for schools.

Assemblyman Scott Wilk, R-Santa Clarita, introduced Assembly Bill 6[2], which would cancel outstanding bond funds approved by Proposition 1A[3], a 2008 voter-approved initiative to fund the state’s high-speed rail project with $9 billion in bonds. In its place, voters would be asked to spend the remaining funds on constructing and modernizing dilapidated school facilities throughout the state.

“Don’t get me wrong, I love trains and would be happy to be able to take one from Los Angeles to San Francisco for ‘dinner and a show’ and back,” Wilk wrote in a recent piece at the Los Angeles Daily News[4], “but not at the expense of the people of California.”

Before allocating up to  $8 billion for school construction, AB6[5] first would first pay off the outstanding debts incurred for the state’s high-speed rail project. The bill requires two-thirds approval of the state Legislature and a majority approval of voters.

“Our students deserve to have well-maintained facilities and it is irresponsible to continue prioritizing the crazy train over our schools,” Wilk said, echoing a favorite phrase coined by GOP gubernatorial candidate Neel Kashkari, who on Nov. 4 lost to Gov. Jerry Brown. “The high-speed rail boondoggle has been a proven failure and it’s time we spend taxpayer dollars in a responsible way.”

State Allocation Board: California needs as much as $12 billion for schools

Wilk points to a Jan. 2014 report by the State Allocation Board that contends California needs to devote as much as $12 billion[6] toward new school construction and another $5 billion to modernization of existing facilities. The obscure board, which includes representatives from the governor’s office and the Legislature, couldn’t definitively peg the total cost of school modernization.  Other State Allocation Board estimates put the figure between $5.9 billion and $6.6 billion.

“There is demand for new construction and modernization funding,” the State Allocation Board School Facility Program Review Subcommittee concluded earlier this year[7]. “The Subcommittee did not come to a consensus on a total dollar amount needed for future school facilities or the exact structure of a future bond.”

The committee struggled to identify the state’s total school modernization costs, in part, because “California does not track the number of schools and classrooms available for use. …

“Currently, data on the number of school sites and classrooms and/or the age of the facilities in the State is unknown.”

[8]How likely is Wilk’s idea to gain traction in Sacramento? Brown remained a steadfast supporter of the project during his reelection campaign. However, support is wavering among other Democratic leaders and state lawmakers. Wilk’s proposal to transfer rail funds to schools could provide liberal Democrats a reason to join a burgeoning right-left alliance against the state’s rail project.

CalWatchdog.com contributor Chris Reed, who has reported extensively[9] on the problems with California’s high-speed rail project, noted that[10] one of the  biggest critics has been Kevin Drum, a reporter for the liberal Mother Jones magazine.

Drum has questioned the ridership assumptions produced by New York-based Parsons Brinkerhoff, which claimed “the high-speed rail system could carry 116 million passengers a year, based on running trains with 1,000 seats both north and south every five minutes, 19 hours a day and 365 days a year.” Drum also pointed out the potential conflict of interest: Parsons Brinkerhoff  helped fund the initiative and has a stake in the outcome.

Flaws in California’s use of school facilities

Wilk’s idea is likely to gain support among conservatives and taxpayer groups, who view the state’s high-speed rail project as an irresponsible boondoggle that enriches private companies at public expense. Since 1998, state voters have approved $35 billion in school construction and modernization bonds. The most recent state bond package, $5 billion approved in 2006, has nearly been exhausted, with just $187.3 million remaining for school construction and $142.4 million left for seismic repair.

“Some concerns about the current program included whether a portable can be truly modernized, as well as the concern that was also expressed in the new construction section that 30 year funds were being spent on buildings that would not have a 30 year life span,” the State Allocation Board found in its Jan. 2014 report.

Any attempt to shift the high-speed rail bonds to schools would different state political functions to the head of the class. Brown has made the rail project his baby, but also is working [11]on reforming school finances.

The teachers’ unions are strong Brown allies. But in addition to the need for school construction and repairs, the California State Teachers Retirement System needs $4.5 billion a year [12]from the general fund to remain solvent.

With such financial problems ahead on the train tracks, high-speed rail may be a ready candidate for the junk yard.