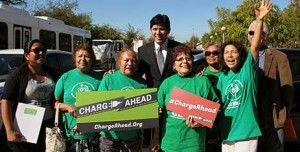 Steinberg himself was not shaken up about the news. He expressed confidence that similar work would be done in some other way, according to the Sacramento Bee[2]. “I have every confidence that Kevin is committed to oversight, but there are many ways to do it,” he said. “This is the way I chose to do it and I’m sure he will have his way.” Steinberg’s oversight office was funded directly through the office of the president pro tem.

That was an expense de Leon clearly did not wish to maintain, despite his willingness to throw a lavish party this October for his swearing in as president pro tem. Many critics, the Los Angeles Times reported[3], found the bash an “inappropriate extravagance at a time when the state Senate is struggling to shake off the taint of corruption scandals and regain public trust.” Earlier this year, three Democratic state senators were indicted on federal corruption charges.

The celebration’s $50,000 tab was not covered by de Leon himself. Instead, the California Latino Legislative Caucus Foundation, which recently attracted five-figure donations from AT&T and Chevron, footed the bill.

De Leon’s approach to spending was recently on display in his shakeup of the state Senate staff. “Last month, de León laid off 39 employees, including staff who wrote bill analyses, did research and performed secretarial duties,” the Bee reported[4]. A shoeshiner, paid a yearly wage of $13,000 “to provide information to Capitol visitors,” also was let go. Staff costs for Steinberg’s oversight office ran to about $380,000 yearly.

De Leon’s choice to trim budgetary costs by reducing staff, however, has not attracted much attention or scorn. The same cannot be said for his elimination of the Senate’s government oversight office.

Steinberg’s oversight office produced a high volume of reports that made a substantial impact. As the Bee reported[4]:

“Investigations found that a lack of scrutiny allowed sex offenders to treat drug addicts at state rehab clinics; that California’s mortgage lender foreclosed on homeowners who were current on their loans; that redevelopment agencies spent money without adequate accountability; and that tax breaks had cost the state $6.3 billion more than anticipated. Other reports made recommendations for curbing fraud in the home health care system and found that an illogical bureaucracy made it hard for regulators to detect fraud in state child care programs. The findings were frequently used as the basis for Senate oversight hearings and also led to new legislation.”

The office’s track record has led some political observers to raise eyebrows and pen editorials calling de Leon’s judgment into question. De Leon’s handling of the issue has left Democrats vulnerable to criticism for trying to return to business as usual following this year’s spate of humiliating scandals, as recent editorial in the Los Angeles Daily News suggested[5]:

“In a further testament to ethical tone-deafness, Senate Democrats have chosen to revive their annual Pro Tem Cup, the golf event and major party fundraiser at Torrey Pines that has charged special-interest representatives up to $65,000 to trade strokes with lawmakers. The event was canceled this year because it wouldn’t have looked so good with Senate Democrats Leland Yee, Ron Calderon and Rod Wright facing ethics charges.”

In another coincidence of timing, cops in de Leon’s district have been handed a new oversight body. In the wake of serious ethics charges of their own, the Los Angeles County Sheriff’s Department was put under civilian oversight by the Board of Supervisors, as the Times reported[6].

And in a second coincidence, the de Leon controversy has unfolded at the same time as a similar one in the federal government, although this time it’s Republicans mainly involved.

In 2012, Issa’s actions led to the House of Representatives holding Attorney Gen. Eric Holder in contempt of Congress[8] over the Fast and Furious weapons scandal.