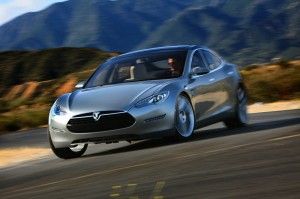 No question that Tesla, in addition to getting a lot of public subsidies and tax breaks[1], has come with some great cars based on incredible technology. But does that justify its $27 billion market capitalization[2]?

Now the Big Boys are getting into the act of producing luxury electric cars. According to Automobile [3]magazine:

Audi, BMW, Mercedes-Benz, and Porsche are about to invest a combined 6 billion euros (about $7.5 billion) in new high-end electric vehicles and plug-in hybrids due out between 2018 and 2021. Their target: the American upstart from Silicon Valley.

Part of Tesla’s appeal is its string of showrooms run by the company, not local dealers. That has enraged some dealer organizations, who even has pushed legislation banning Tesla’s sales model. In October, Michigan even passed a law officially banning [4]car sales without a dealer.

The German makers, of course, already have large dealer networks across the country. They also have long experience of the kinds of luxury cars people buy.

This is good because competition is good. Even if Tesla, and the other companies as well, get numerous tax and other breaks. It’s hard to find a product in any field that isn’t given some kind of advantage by governments. Too bad, but that’s just the way it is.