Are millennials being priced out of California? 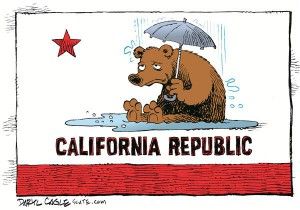 Are millennials being priced out of California?

Young Californians are not only worse off than their parents’ generation, but they’re doing worse than their counterparts in the rest of the country.

“Many of the differences between generations examined within these latest data reflect long-term demographic and societal changes,” said Jonathan Vespa[2], a Census Bureau demographer. “Three decades of decennial census statistics combined with the latest American Community Survey statistics give us a unique view of how — and where — our nation is changing.”

Among the five years of data, the most striking statistics are in the area of employment. Despite being better educated, young Californians are earning less money than their parents and are less likely to have full-time employment.

As Slate recently wrote[4] of U.S. Census data analyzed by the Young Invincibles, “For Americans between the ages of 25 and 34, annual income earned from wages has fallen in four of the top five biggest employment sectors — retail (down 9.9 percent), the leisure and hospitality business (down 14.65 percent), manufacturing (down 2.87 percent), and professional and business services (down 4.28 percent).” According to the study, the one exception is health care, which has remained nearly unchanged.

While Californians earn more than the national average, much of the wealth has been concentrated in the Bay Area, which skews California’s statewide figures.

In San Francisco County, the average full-time worker, between the ages of 18 and 34, earned a median annual salary of $59,580 — more than double the average wages in rural Madera and Modoc counties. The average young worker in the tech-dominant San Jose metro region earns $51,149 per year — 52 percent more than their counterparts in the Los Angeles metro area.

Millennials can expect lower wages  throughout  their working lives. Lisa Kahn, a labor economist at Yale University, found that [5]college graduates that enter a weak economy suffer lower wages throughout their entire careers.

“I find large, negative wage effects of graduating in a worse economy which persist for the entire period studied. I also find that cohorts who graduate in worse national economies are in lower-level occupations, have slightly higher tenure and higher educational attainment, while labor supply is unaffected. Taken as a whole, the results suggest that the labor market consequences of graduating from college in a bad economy are large, negative and persistent.”

Price of housing top in nation

While wages have declined for millennials, the cost of housing has continued to increase.

California is home to three of the most expensive major cities for housing in the country: Los Angeles, San Diego and San Francisco. The most expensive city in the country, San Francisco, has an average median home price of $744,400 and requires an annual salary of $145,500 to pay the nearly $3,400 mortgage, according to Business Insider[6]. That’s double Seattle and Chicago and more than three times the cost of Houston, Dallas and San Antonio.

The city of San Jose estimates the average apartment[7] in San Jose rents for $2,230 — up by 49 percent in the past four years.

“Housing costs in the peninsula, from San Francisco to San Jose, have doubled in the last five years,” writes Kerry Cavanaugh[8] of the Los Angeles Times. “It’s even worse in San Francisco, which recently surpassed New York City as the most expensive rental market in the nation.”

Unsurprisingly, due to these increased housing costs, millennials in California are more likely to live with their parents than those in the rest of the country or previous generations.

Poverty, too, has increased among young Californians. Nearly one in five Californians aged 18 to 35 lives below the poverty line, an increase from 1980.

The U.S. Census Bureau analyzed five years of demographic, economic and housing data collected between 2009 and 2013.