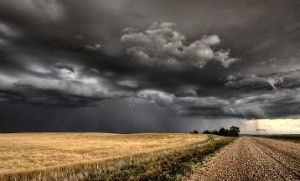 Bringing cheer and presents, on Christmas Santa Claus is going to fly over a California a lot greener than was expected a month ago by the National Oceanographic and Atmospheric Administration and climate scientists.

On Dec. 19, the San Francisco Bay area was hit with its fourth storm in five days[1]. Then on Dec. 21, high tides[2] hit the Bay Area from ocean swells created by the storms. The Bay area has received 14.92 inches[3] of rainfall thus far this winter. That’s 7.8 times the amount at the same time last year (about 1.92 inches).

What makes the storms even more newsworthy is not only that are they tapering the drought. They also were not forecasted by climate scientists, El Nino/La Nina experts, or government weather agencies.

Bill Patzert [4]is a climatologist with NASA in Pasadena and once worked as a global-warming scientist for Al Gore[5]. He attributed the storms to a “Pineapple Express,” a funnel of rain from Hawaii.[6]

Meteorologist Bernie Rayno[7] of AccuWeather said the storms were not from a “Pineapple Express,” but from across the Pacific. “Pineapple Expresses are not known for wind, but they’re known for rain,” he said.  Satellite images reportedly showed dry air around Hawaii.

Back on Oct. 16, the NOAA[8] forecast above-average temperatures and a likely intensification of drought in California.  While the NOAA said the drought would “improve” (lessen) by December, they said there was no indication of an El Nino weather pattern developing.  An El Nino[9] is a late December rainstorm that forms from warmer water in the Pacific Ocean, often starting near Peru and Ecuador.

In a turnabout, experts are now forecasting wet conditions and colder temperatures for the next three months[10]. But it won’t be a drought-busting “monster season,” according to Steve Baxter of the NOAA.

But how reliable are such forecasts when no one predicted the December rainstorms would drop substantially more amounts of water than normal?   The National Drought Mitigation Center[11] in Nebraska reported the following California rainfalls totals from Thanksgiving Day to Dec. 17:

The Yucaipa Ridge on the southerly side of the San Bernardino Mountains in Southern California had a gusher of 14.6 inches[12] of rainfall in the first week of December.  That water was captured by Seven Oaks Dam[13], which was completed in 2000 at a cost of $1.7 billion.

This is as much funding as some of the large new dams proposed under the Proposition 1[14] State Water Bond voters passed on Nov. 4.  The dam was built by the U.S. Army Corps of Engineers, but funded locally[15].

That shows not all water projects need to be funded by the state.  And dams are critical to water conservation efforts downstream.

The water behind Seven Oaks Dam flows down the Santa Ana River to Prado Dam, where it recharges the Chino Basin.  The Chino Basin[16] holds 5 million acre-feet of water, serving 1.2 million people in San Bernardino County. 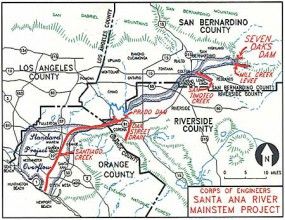 Capturing water in the Santa Ana  basins before it flows to the Pacific Ocean is crucial for the Chino Basin.  However, in Northern California, water flowing in the San Joaquin River[17] is routinely flushed to the ocean for fish runs instead of allowed it to recharge water basins.

What has really helped in December is that the rainstorms have occurred consecutively over several days, allowing more capture of water and replenishment of water basins.

So far this year weather forecasters have only been able to predict a rainfall trend until after the trend has already begun.  Mother Nature has outwitted the experts.