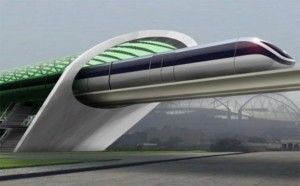 Silicon Valley impresario Elon Musk’s Hyperloop[1] transportation concept is back[2] in the news. With a price tag that seemed daunting, especially when Musk warned he lacked the time to pursue the project, when it was advanced a year ago Hyperloop achieved little beyond sparking the imagination.

But now, Dirk Ahlborn, the head of his own California startup, has stepped forward to seize the initiative on making Musk’s super-fast trainlike vehicle a reality.

In a surprise for those outside the Silicon Valley bubble, Ahlborn recently announced  his JumpStartFund has the wherewithal to take Hyperloop off the drawing board and into reality. “I have almost no doubt that once we are finished, once we know how we are going to build and it makes economical sense, that we will get the funds,” he told[3] Wired magazine.

Ahlborn predicts the effort will cost $16 billion and 10 years’ time, assuming a technical feasibility review planned for next year doesn’t reveal any insurmountable hurdles. In the meantime, JumpStartFund has “created the sub-company Hyperloop Transportation Technologies Inc. to develop the system,” relying on crowdfunding, crowdsourcing, and an improvised “collective” of engineers to move the ball forward, according[4] to The Guardian.

Some 100 experts drawn from Boeing, NASA and Musk’s own SpaceX have been enlisted by JumpStartFund — and have already produced[5] a 76-page memorandum laying out their vision for how the project can proceed.

Remarkably, JumpStartFund’s collective has “expanded on Musk’s concept and now envisions a huge interconnected Hyperloop system, spanning coast to coast and linking many of the U.S.’s major cities,” as Quartz reported[6].

Back in August 2013, when Musk first revealed the Hyperloop concept, critics immediately dismissed its real-world applicability. Not only did supporters of California’s current high-speed rail project find reason for skepticism; analysts worried Musk had simply underestimated practical challenges like overheating, despite ballparking the cost of Hyperloop at somewhere around $10 billion.

Nevertheless, Musk’s track record of innovation attracted serious attention to the idea. Unlike a traditional train, Hyperloop would “send passengers hurtling through low-pressure tubes in ultra sleek pods at speeds of up to 800 miles per hour,” as CalWatchdog.com previously reported[7]. “At that clip, a trip from Los Angeles to San Francisco would take a mere half hour. That’s two hours and eight minutes faster than California’s bullet train promises to make the 432-mile jaunt.”

All told, the scheme created near-perfect conditions for a storm of media interest. Hyperloop was controversial without being outrageous, farfetched without being ridiculous, and — theoretically — competitive with one of California’s biggest and most fiercely challenged infrastructure projects in history.

But without direct funding and dedicated personnel, Hyperloop couldn’t begin the complex research and development that would lead to its construction. As media interest moved on, and Musk broke new ground with Tesla and other marquee projects, public expectations around Hyperloop moved to the back burner.

Privately, however, Hyperloop remained relevant to the kinds of people it would need to move forward.

For now, the Hyperloop team’s sky’s-the-limit approach has yet to attract the political rancor associated with California’s high-speed rail endeavor, which has benefited from the unswerving devotion of Gov. Jerry Brown.

As research advances, however, attention from policymakers and activists will likely become inevitable. The costs associated with the project — borne by private investors, not public funds — could prove enough to renew argument about the future of Brown’s bullet train.

As CNBC revealed, the Hyperloop team “estimates that the cost of the system would be $20 million to $45 million a mile, as contrast from what it says are costs of up to $200 million a mile for a conventional mass transportation system.”