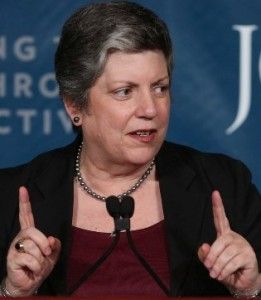 It was Matt Drudge who dubbed Janet Napolitano “Big Sis” when she was the head of the U.S. Department of Homeland Security. Given her duties of spying on Americans and repressing us in the strangely Teutonic-sounding “homeland/heimat” department, it was a play on Big Brother in Orwell’s “1984.”

Then heads shook in wonder when University of California Regents last year named her the school’s president even though she had no academic credentials.

Well, now she’s finally getting those credentials. According to AP,[1] the school just appointed her “as a tenured faculty member at UC Berkeley’s Goldman School of Public Policy.”

I suggest some classes she could teach: