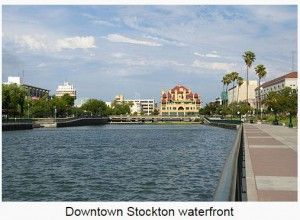 The New Year is going to bring increasing difficulties for some California cities because of the 2014 settlement of Stockton’s bankruptcy. The reason: because all cities are linked under California municipal laws, especially for pension costs, borrowing costs are going up across the state.

Involved are what’s called “certificates of participation,” which Investopedia defines as:

“A type of financing where an investor purchases a share of the lease revenues of a program rather than the bond being secured by those revenues. The authority usually uses the proceeds to construct a facility that is leased to the municipality, releasing the municipality from restrictions on the amount of debt that they can incur.”

COPs do this by creating a fiction that they are leasing a newly built administration facility, rather than having to borrow to build it.  Investors can participate by purchasing a share of the rental revenues, rather than buy bonds that pay interest.

Contrast these “COP’s” with a general obligation bond[1] that has to be paid back by all taxpayers. A true revenue bond[2] pays back debt by the fees, tolls or ticket prices of a municipal facility, such as a municipal golf course, tollway or stadium.

COPs are one of the ways cash-strapped cities got themselves into fiscal insolvency and sometimes bankruptcy, while also over-promising to pay lucrative pensions to public employees. COPs tap city General Fund expenditures to pay rent. The problem is the General Fund is the same pot of money that pays for pension obligations, retiree health care benefits and salaries of police and fire.

As long as the Real Estate Mortgage Bubble of 2003 to 2008 was inflating, there were revenues in the city of Stockton[3] operating budget to meet all its obligations.  Once the bubble popped, there weren’t enough revenues to meet all these obligations.

The only way to induce investors wary of getting repaid on future lease back deals is to offer higher interest rates.

One of the risks in COPs is that cities have the right to divert the rental revenue from investors to make payroll obligations in a cash crunch.

William Bonawitz[4] of PNC Capital Advisors told Bloomberg, “It is not so much the probability of default is any different.  It’s really the severity of loss would differ greatly.” Recoveries to investors ranged from 100 cents on the dollar for lease-back financing of administrative buildings, to less than 15 cents on the dollar for municipal golf-course securities.

While golf courses generate self-sufficient revenues, they nonetheless are vulnerable to having to pay premium borrowing rates to offset the losses on lease-back financing of city administrative facilities. Moreover, investors are going to want collateral to do any future lease-back deals and that collateral may be a golf course, airport, sewer plant, power plant or toll bridge.

In Stockton’s case, National Public Finance Guarantee Corporation and Assured Guaranty Corporation insured[5] the Stockton debt and settled with creditors.  But that insurance premium is surely going to be much higher next time not only for Stockton, but for all cities in California.

Indeed, Franklin Templeton Fixed Income Group’s Municipal Department[6] announced it no longer will be investing in COPs. Even worse, cities may be at risk of losing a revenue-producing facility in the event of insolvency of an administrative building built by lease-back financing.

Bottom line: Stockton’s bankruptcy may end up with cities not only going bankrupt, but losing their municipal infrastructure.