Will young CA justices use Vergara case to audition for SCOTUS? 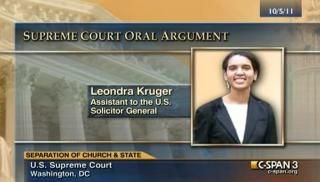 Leondra Kruger has been confirmed to a seat[2] on the Supreme Court of California, a position to which she was nominated by Governor Jerry Brown[3] last month. Governor Brown previously appointed Goodwin Liu (confirmed in 2011) and Tino Cuellar (confirmed in August[4]).

These appointments make the California Supreme Court a court of national interest, in part because a Democratic President would likely consider Brown’s picks if there is a future U.S. Supreme Court vacancy on his or her watch. Brown’s picks share diversity, elite credentials, and youth. Given that prior judicial experience is a big asset for those hoping to land on a Supreme Court shortlist — it’s not required[5], but it’s helpful — Brown’s nominations likely expand the set of candidates to be considered if or when there is a future SCOTUS vacancy under a Democratic president in the next few Presidential election cycles.

As the picture above suggests, Kruger has already handled big cases before SCOTUS, representing the Obama administration. If Kruger, Liu and Cuellar are intrigued by this possible promotion, that seems to make it more likely that individually or together they will stake out bold new stands on major issues. There’s a pent-up desire among millions of liberals for more Warren Court-style sweeping rulings addressing perceived issues of social justice. A Democratic president, even a center-left politician, would see appointing activist judges to the high court as an easy way to please big Dem constituencies.

Brown vs. Board of Education for 21st century?

This could bode very well for the reformers behind the Vergara vs. California case.

The trial court judge, Rolf Treu, likened state laws[6] that funnel the worst teachers to the schools with the most troubled students to segregated schools that existed in the South before the 1954 Brown vs. Board of Education ruling, one of the most monumental in U.S. Supreme Court history. The state is now appealing Treu’s finding that teacher protection laws are unconstitutional because of their negative effect on minority students, and the case is close to certain to end up before the California Supreme Court.

If I were a CTA or CFT lawyer, this dynamic would worry me a lot — especially after reading the Vergara editorial[7] in the most influential journal of liberal opinion, the New York Times:

The ruling opens a new chapter in the equal education struggle. It also underscores a shameful problem that has cast a long shadow over the lives of children, not just in California but in the rest of the country as well.