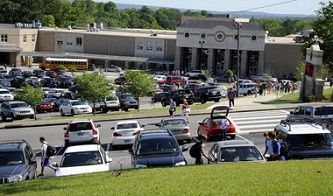 San Diego tech entrepreneur Michael Robertson is also a libertarian civic activist challenging government nuttiness and illegality. In a public Google Docs file[1], he explained how to fight a petty abuse of power used in some school districts to free up more funds for teacher compensation. Here’s are some highlights:

My kid goes to government school where they demanded he pay $40 per year to park in “their” parking lot. I was able to encourage the district to drop parking fees at not only his high school, but all of the area schools. I want to tell you how I did it and embolden others to campaign for change where they feel it makes sense.

Since bus service in many places has been halted, students have to be driven to school by their parents or drive themselves to K-12 school. It’s not uncommon for San Diego area high schools to charge parking fees of $10 to $40 per year. My kid’s school charged $40. This led many kids to seek out nearby off-street parking while the school parking lot was never full.

When pressed about this fee, school officials claim that charging for parking is permissible and may even point to language[2] on their web site. … Just because a school claims they have a right doesn’t mean they actually have the authority. The California constitution guarantees every child a free K-12 education and charging for parking would violate that precept. How they spend it is not relevant to the question if they have the legal authority to charge for a parking lot that was built and maintained by property taxes and school bonds.

The first step to a challenge is to collect public information to insure your position is factual. A simple email should be sent to the district superintendent asking for documents related to the issue. They are required to provide existing relevant documents … .

Sample of how to get the ball rolling

I am requesting all documents related to billing, collection

and expenditures of parking permit fees at district high schools from

These documents revealed that the San Dieguito district collected around $77,000[3] last year in parking fees. Also it showed that they only charged students and not teachers or administrators. I forwarded these documents onto a local education activist Sally Smith as well as a local reporter Marsha Sutton. Sally penned a Uniform Complaint[4] and sent it to the district. Don’t be intimidated by the official sounding title. It’s simply a document outlining the objection to a specific issue.

Marsha wrote a revealing article[5] garnering more public light than a posting on my blog would have done. Sally’s complaint made a strong case about why the district did not have the authority to charge fees for several activities (parking, athletics and photography). And to the parking fees specifically, she pointed out that government operations cannot charge fees to some citizens and not to others which they do because they charge students but not others who use the same parking lot.

Unsurprisingly, the district responded affirming their right to charge parking fees just as UC and Cal State colleges do. The obvious difference there is that the California constitution doesn’t guarantee a free college education as it does for K-12. More emails were traded with both sides outlining their position.

Over the summer I asked for a meeting with the Superintendent Rick Schmidtt to discuss the parking fees and other issues. … I expressed how the parking fees was a significant amount of money for many students. I emphasized how this was an issue I planned to continue to pursue until it was overturned. … We parted ways with him saying the district was analyzing the situation.

A week before the new school year, I learned that parking would be free for the entire district. Later that month the board OK’d an official policy change. The Superintendent was clearly instrumental in the change. …

This is a tiny victory for community activism thanks in large part to a group effort. I hope it can be a blueprint for involvement on an issue that may be important to you where government intersects your life.

Way to fight the power, Michael!

Michael’s story is a perfect example at the micro level of my Grand Unifying Theory of California Politics (GUTCP):

“Everything about California politics is much easier to understand once you realize that by far the top priority of by far the state’s most powerful group is protecting the interests of veteran teachers.”

San Dieguito was looking to protect general fund dollars for teacher compensation by any means possible — legal or not.