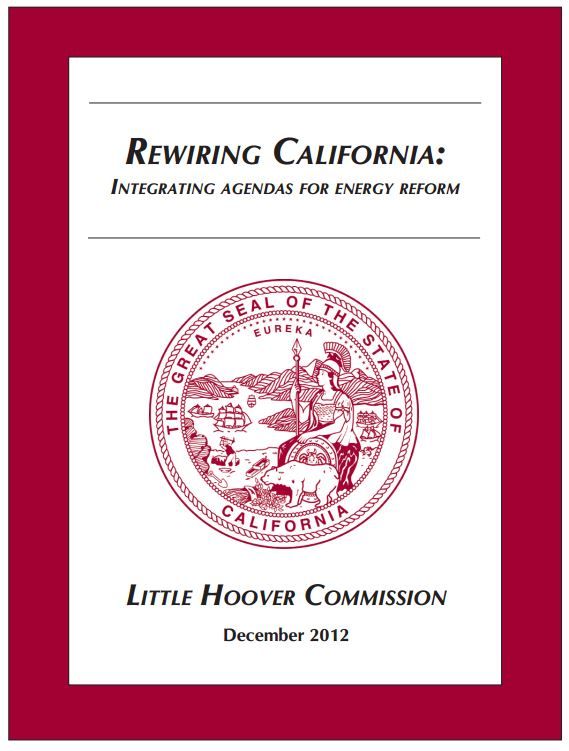 The commission is the state’s independent state oversight agency. And 13,000 megawatts is the estimated amount of new green energy, according to “Rewiring California,” p. vii, coming on line in the course of the next decade in California under AB32, the Global Warming Solutions Act of 2006[3] and other state laws.

On Oct. 24, Little Hoover sent a letter[4] to Brown to hold the governor accountable on answering the much-avoided question about mandated green energy: How much is it going to cost, beginning in 2015?

Neither has the Legislature passed the two electricity reform bills recommended by the Commission:

Assembly Bill 1763[5] is by Assemblyman Henry Perea, D-Fresno. It requires the California Energy Commission to consult with other state and local agencies to develop “a report containing a state energy plan for 2030 and 2050 that promotes economic growth, ensures reliable, sustainable and affordable energy resources, and complements the state’s environmental stewardship goals.” The report then would be submitted to the governor and the Legislature.

No action[6] was taken on AB1763 this year, and a hearing on it was canceled.

Assembly Bill 1779[7] is by Assemblyman Ted Gaines, R-Roseville. Taking into account the implementation of AB32 and other state laws, it requires the CEC to “prepare a new, annual report to assess the effect in the aggregate of specified policies on electricity reliability and rates and whether these policies are achieving their stated environmental and economic goals.”

Back in April, AB1779 failed to pass [8]the Assembly Natural Resources Committee. After that, nothing happened.

It’s not clear whether the bills, or similar ones, will be reintroduced into the new legislative session that began on Dec. 1.

If there is no further action, can Little Hoover really issue subpoenas to get answers? Yes.

The governor appoints five[10] of the nine members of the Little Hoover Commission. So it is highly unlikely it would subpoena him on this or any other matter.

And two members are appointed by the Assembly speaker, with the final two appointed by the chairman of the state Senate Committee on Rules. So it’s also unlikely legislators would be subpoenaed.

Little Hoover potentially could compel testimony from lower-level state policymakers, such as California Air Resources Board Chair Mary Nichols. But given her high profile and close relationship with Brown, that also seems unlikely.

Ultimately, it’s the voters who must hold the governor and legislators accountable. Which they may do if green-power costs spike energy rates.