When elected officials participate even very indirectly in a process that improves their compensation, the public goes wild. It’s powerful attack-ad fodder for candidates seeking to unseat such politicians.

But when powerful bureaucrats engage in such in a maneuver — even in much more direct fashion — there doesn’t seem to be nearly as much media coverage, and thus quite a bit less awareness (and thus grousing) from taxpayers.

The single worst example of this in recent California history was so extreme, there was a public backlash. That came in 2009, when the bureaucrats at the giant Metropolitan Water District of Southern California tried to give themselves an amazing gift. Here was my shorthand description:

[The MWD has been] preparing to retroactively increase the pensions of its entire staff by 25 percent at a time when it was in the middle of a two-year, 31 percent increase in the rates it charges water districts serving 19 million people from Ventura to Riverside to San Diego. The MWD’s pension system was already $400 million underfunded. Now MWD bosses, who stood to reap huge gains personally, were moving to increase the unfunded liability by $70 million.

Several newspapers, led by The Orange County Register, got the word out. (But not The Los Angeles Times[1].) Then John & Ken got in the mix, and the MWD caved.

Fighting for high pensions — without a rationale 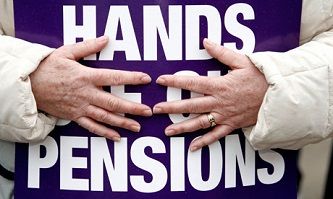 But that’s the exception. The far more common story is the city manager or police chief who in public depicted themselves as tight-fisted defenders of taxpayers but who behind the scene defended or introduced pension sweeteners and stalled or blocked pension reforms. Why? Because they stood to benefit from generous pension policies even more than the rank-and-file.

For years, the short list of those with among the highest pensions of any retired public employee in San Diego County always featured city managers who defended Cadillac pensions as necessary to keep staff even though their cities had negligible turnover and there was no evidence that any employee category (except for police officers) were in demand.

But now we  have a new group of public employees using an inappropriate new set of tools to protect their compensation. This is from Reuters[2]:

A group of judges is suing California’s public pension system CalPERS and the state of California over claims their pension contributions have been almost doubled unlawfully.

Under state pay grades, the six California Superior Court judges each earn more than $181,000 a year. The lawsuit filed on Dec. 23 says their pension contributions should be lowered by about $13,000 a year.

The six, who were elected in 2012, claim a pension reform law signed by Governor Jerry Brown which took effect Jan. 1, 2013 has raised their pension contributions to 15 percent from 8 percent of their salary. They say the 8 percent contribution was set in stone and should not have been raised by the new law retrospectively.

The question of whether pension contributions from public employees can only be decreased, with the government bearing the extra burden — and never increased, with the employee bearing the extra burden — is one of the most crucial legal battles local and state governments must fight in order to bring down pension costs that are on track to eat up one-quarter of the budget in many agencies. It’s also something that drives taxpayers nuts when the only-goes-down argument is presented.

But now we have six state judges saying, “No, that’s not open to debate at all. Give us our money and stop your whining.”