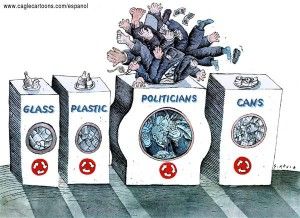 California’s tug-of-war[1] over the legality of single-use plastic bags will get another twist in 2015. Thanks to a determined signature collection campaign mounted[2] by industry opponents, a referendum putting the ban to a vote now seems certain to land on state ballots in 2016.

The plastic-bag industry, unhappy with the law’s requirement that they shift to the manufacture of more durable multi-use bags, moved with a degree of swiftness and efficacy unusual in signature-collection campaigns.

Would-be ballot initiatives often rely on relatively unfocused or underfunded operations. But would-be referenda, as the Sacramento Bee reported[3], come with a legally mandated 90-day window to collect sufficient signatures. That left bag-ban opponents with just 90 days to rack up over 500,000 valid signatures.

But the American Progressive Bag Alliance, an industry group, launched[4] its signature drive right on the heels of Gov. Jerry Brown’s own signature — of Senate Bill 270, the final bag-ban bill that landed on his desk in September. Fully prepared for a swift, successful effort, the Alliance got to work. Now, supporters of the referendum say they’ve cleared the 800,000 signature mark, although the final tally has not been officially counted.

Cold, hard political reality provided much of the impetus behind the signature-gathering campaign. Not only was a hustle essential to landing the referendum on the ballot. Qualifying for ballot placement puts an automatic freeze on the implementation of the law to be challenged. Scheduled to kick in on July 1 of this year, the bag ban will be put on hold until the results of the referendum are certified.

What’s more, however, the time that delay buys manufacturers will result — at minimum — in an extra revenue boost of two years’ worth in single-use bag sales. As the Washington Post observed[5], the 16-month freeze triggered by ballot qualification “will allow manufacturers to continue producing plastic bags until voters act. Sales of those plastic bags could amount to $145 million,” according[6] to Californians Against Waste, a pro-ban group that announced its estimate.

It’s a number that adds some perspective to the big industry outlay of over $3 million in signature collection.

The bag industry has not been alone in throwing its weight around over the dollars and cents on the line when Sacramento Democrats determined they wanted to take California’s many municipal bag bans statewide.

Backroom negotiations cobbled together enough support in Sacramento to outlaw the bags last year. Then the coalition of environmental, political and labor interests behind the ban fell apart at the last minute — only to be resurrected after further wrangling.

The result was a failed vote to ban single-use bags, followed swiftly by a do-over that succeeded in placing the ban on the books. What made the difference? Concessions[7] to the United Food and Commercial Workers Union, which scuttled the first vote by turning against SB270 when it became clear a minimum 10-cent surcharge on bags would be part of the deal.

After cutting a deal with the Safeway grocery chain, dispelling union fears the surcharge would flow into executives’ pockets, not its own, the UFCW switched back to supporting SB270. The bill passed.

Despite the unglamorous machinations that played out only partially behind the scenes, California’s bag bans — both at the state and local level — have managed to maintain a significant base of public support.

Already, as the Post reported, about a third of the state’s population is within local jurisdictions that have done away with single-use bags. Much of that comes from the ban by the city of Los Angeles[8] that went into effect on July 1 last year.

Add to that Californians outside those areas agitating for a ban, and residents who don’t have an objection to the law, and referendum supporters face a challenging electoral landscape in 2016.

Though there is still plenty of time to shift public opinion, a USC Dornsife poll [9]showed Californians still backing the ban by a 2-to-1 margin.