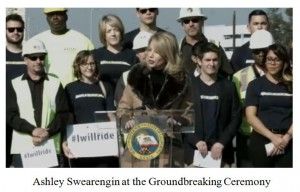 Yesterday in Fresno the California High-Speed Rail Authority officially conducted the groundbreaking ceremony for its bullet-train project – but no dirt actually was turned.

After an hour of speeches, a “ceremonial signing” of a railroad tie was conducted by dignitaries from the federal, state and local governments. Not a shovel was in sight. The ceremony is online here[1].

Speaking first was Fresno Mayor Ashley Swearengin, a Republican and major project supporter, who two months ago lost a campaign[2] to become the state’s controller. “This is the day we officially commemorate the beginning of the nation’s first high-speed rail project,” she said. “A project that promises to connect Northern, Central and Southern California together like never before. This project establishes Fresno as the Central Cog, the essential connection point for Northern and Southern California. This day has been in the making for 30 years.”

Next spoke CHSRA Chair Dan Richard, the master of ceremonies:

“Today we’re gathered here to celebrate a demarcation, a new phase for the high-speed rail program for California. The conceptualization, the environmental analysis, the appropriations, the litigation, the planning, the site preparation, and the demolition…. They’re all behind us. Now we build. We’re entering a period of sustained construction on the nation’s first true high-speed rail system and for the next five years here in the Central valley and for the decade beyond that we will be building across California.”

Gov. Jerry Brown spoke last and dug into his dictionary to call project opponents “pusillanimous,” which Merriam-Webster defines [3]as, “weak and afraid of danger; lacking courage and resolution; marked by contemptible timidity.”

But he did concede a question, “Where the hell are we going to get the rest of the money?” To which he quickly replied, “Don’t worry about it, we’re going to get it.” More detailed answers may come Friday when he releases his state budget proposal for fiscal year 2015-16, which begins on July 1.

As CalWatchdog.com reported [4]two weeks ago, although Bakersfield dropped its lawsuit against the project, six other lawsuits remain.

The CHSRA has not finished an environmental analysis on all the required segments to build the initial operating segment.

Stuart Flashman[5] is an attorney for Kings County and two local citizens opposing the high-speed rail project. He said:

“My clients understand that the Authority, having promised the Federal Railroad Administration that construction would start in 2012, are feeling that they need to put a spade in the ground, at least for show. That is all this groundbreaking is. It is certainly not earth shattering, or even ‘groundbreaking’ in terms of actual progress of the Authority’s plans.”

“Instead of a groundbreaking, this should be called a ‘breaking of faith’ with Central Valley residents, who are being treated very shoddily. Only a fraction of the land value is being offered to landowners, despite past promises; their rights are being stepped on.  Overall, the Authority is two years behind in its critical schedule. Very little ‘contiguous’ land has been acquired. That has not allowed the Authority to make real progress in laying track. The groundbreaking is a charade.”

The Sacramento Bee[6] reported another irony:

“Despite the downtown Fresno setting for Tuesday’s ceremony, the first major construction on the Madera-Fresno segment is anticipated to be at the eastern edge of Madera, where an elevated bridge will be built to span the Fresno River, Highway 145 and Raymond Road just west of the existing BNSF Railway freight tracks.”

Another problem is the clock is ticking rapidly on the expiration of President Obama’s 2009 American Recovery and Reinvestment Act[7], which provided money nationally only for “shovel-ready” projects.

Those federal funds of $3.3 billion must be spent by Sept.  30, 2017. An accounting of the spending is due 6 months prior to that deadline.