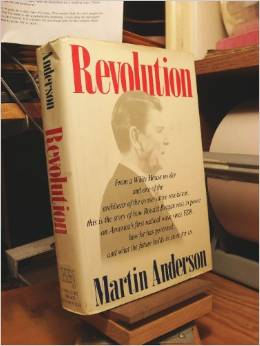 One of the architects of American prosperity died last week[1], economist Martin Anderson. He was a key architect of Reaganomics in the early 1980s, which provided the foundation of prosperity in America, and worldwide, until the 2008 Great Recession.

Anderson long was associated with the Hoover Institution at Stanford University. Shortly after I came to the Orange County Register to write editorials in the late 1980s, he stopped buy to discuss his new book, “Revolution[2],” detailing the economic, defense and other polices of the Reagan years. He was a real gentleman and helped us understand the economy. He became a source of mine on economics issues.

The quandary is why Republicans have not continued the Reagan-Anderson prescription for prosperity: Sound money, permanent tax cuts, spending cuts and de-regulation. Reagan-Anderson showed them how to do it, winning two landslides in the process. But Republicans, while citing Reagan as a kind of totem, have refuse to follow his actions.

And yes, Reagan wasn’t perfect. He increased some taxes and didn’t cut spending enough. But overall, taxes were cut. And as he left office, the budget deficits — created to increase defense spending to win the Cold War, which he did — were going down fast.

For example, President George H.W. Bush actually increased taxes in 1991, infamously breaking his 1988 election pledge, “Read my lips! No new taxes![3]” The economy crashed and in 1992 voters dumped him for Bill Clinton.

Later, President George W. Bush’s 2001 and 2003 tax cuts had expiration dates on them — they weren’t permanent. That scrambled business and personal financial decisions as the expiration date approached: from about 2008 through Jan. 1, 2013, when some (but not all) the tax cuts finally were made permanent. This confusion was a reason, although not the only one, for the recession being the Great Recession.

In 2008, nominee John McCain had opposed even Bush’s inadequate tax cuts, while proposing a defective tax-cut plan of his own. And in 2012, nominee Mitt Romney was saddled with the massive tax increases to pay for the RomneyCare program he imposed in Massachusetts as governor, and which became the model for Obamacare.

In California, Republicans have had the misfortune that the last two governors they managed to elect, Pete Wilson and Arnold Schwarzenegger, in office increased taxes. The last tax-cutter elected was Gov. George Deukmejian, way back in 1986 — 29 years ago. In 1987, he even rebated [4]a $1.1 billion surplus to taxpayers.

The party obviously has many problems, some of which it has been correcting the past couple of years. But a major remaining problem for the CA GOP is it has gone against its signature issue: tight-fistedness with the taxpayers’ money.

The Reagan-Anderson prescription for prosperity — and victory at the polls — still is out there waiting for some Republican candidate for president to use it in 2016, and for governor in 2018.