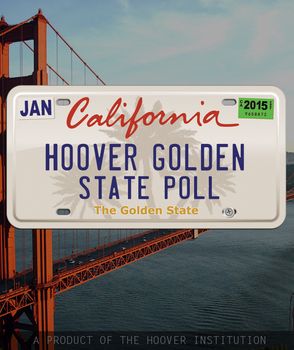 Gov. Jerry Brown just won a resounding re-election victory. But his new budget released last week for Fiscal Year 2015-16, which begins on July 1, is out of sync with Californians on some important issues, according to the Hoover Institution’s new Golden State Poll[1]. It questioned people between Dec. 9 and Jan. 4.

The poll’s findings are consistent no matter political party, income or education level, race, gender, ideology or interest in following the news.

Much lower down on the list are some of Brown’s top priorities:

Brown’s budget proposal runs against the grain of public opinion by:

Viewed in that frame, the Hoover Poll indicates Californians want economic growth, jobs and a concrete solution to the state’s perpetual drought problems.

Conversely, they consider it a low priority to make pensions sound, reduce income inequality, protect the environment, deal with global warming or proceed with the high-speed rail. In fact, the rail project received the lowest priority of all by far: just 16 percent.

That means 84 percent of Californians are not enthusiastic about the project. Yet Brown has branded rail opponents “dystopians and declinists[10].”

One anomaly is over public pensions. Despite low public awareness, this is a $500 billion[11] problem that just can’t go away. Even the bankrupt cities of Vallejo, San Bernardino and Stockton have been forced [12]to fund pensions above all other priorities. Doing so has brought both large budget cuts to essential services and tax increases.

The voters’ voice is clear from the Hoover poll: Californians want economic growth, private sector jobs and a real solution to the drought problem.

However, it is unlikely the Legislature is going to rectify the budget to be more in line with voters’ priorities given that only 34 percent of those polled by Hoover had any trust in state government.

A mismatch between voter desires and government action is a recipe for political dysfunction.