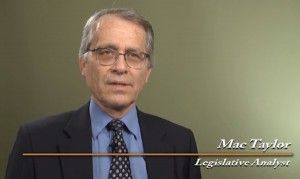 With California’s state budget in the best shape in years, Democratic legislators are eager to open the spending spigots. But they were cautioned at an Assembly Budget Committee hearing[1] Jan. 15 that the good economic times could end as quickly as they began, plunging the budget back into the red.

Legislative Analyst[2] Mac Taylor warned the committee that California’s budgetary revenue is among the most volatile in the country for fiscal year 2015-16, which begins on July 1.

As a result, he considers the $3.4 billion rainy day reserve fund in Gov. Jerry Brown’s $113 billion budget proposal[3] to be minimal. He’d prefer a 10 percent reserve.

“You need to think in terms of having a large reserve,” Taylor said. “I appreciate the pressures that you have on you from various groups. I would hope that that [$3.4 billion reserve fund] would be sort of a floor and hope that maybe you could build on that.

“Because a downturn is coming in the near future. We don’t think it’s next year. California is growing well, but things can happen. And the more that you have the reserve, the less disruptive it is to you in making these sort of terrible short-term budget adjustments.”

That downturn is overdue, warned Keely Bosler[4], chief deputy director of the California Department of Finance[5]. She noted that the country is “nine months past the average length of an expansionary period in the post-World War II era. Our economic forecast does not predict a recession, but economists rarely do. So there is a threat. The economy does continue to grow at this time, though.”

“The bipartisan new rainy day fund will accumulate a portion of volatile capital gains revenue so that we can use these funds during the next recession when Californians need services most,” she said. “However, it may not be enough. The governor proposes savings that amount to 2 percent reserve of all expenditures. In 2008-9 alone general revenue dropped 20 percent.”

Melendez also believes the state should prioritize taking care of its existing obligations.

“The governor has been a vocal advocate of paying down debt,” she said. “And for that we are very pleased. This budget proposes debt payments to our schools, cities and counties. Yet even under this proposal, we are concerned that we may not be eliminating enough debts and liabilities. Hundreds of billions in pensions and retirement liabilities loom, and repaying these needs to be a priority.”

There are additional constraints looming on the budget. Bosler noted state budget revenue will be taking a hit when the temporary Proposition 30[7] quarter-cent sales tax and “millionaire” income tax hikes begins phasing out at the end of 2016. “The budget is precariously balanced, especially over the forecast period, which is through 2018-19,” she said.

“But also over that same forecast period we are also going to be facing increased expenditures in the state’s general fund. One of the larger ones is the fact that we will be taking on a share of costs of the optional Medi-Cal expansion that was a part of the [Obamacare] health care reform. And those costs will be a billion dollars by the end of the forecast period.”

More than 12 million Californians, nearly a third of the state’s population, are projected to be receiving Medi-Cal benefits in the coming year, Bosler said. “Also, we’re seeing increased costs in that program, mainly related to administrative actions taken by the federal government.”

The state plans to spend an additional half-billion dollars in the coming year to fight wildfires caused by the ongoing drought, she said. And hundreds of millions more will be spent on entitlement programs for illegal immigrants granted federal amnesty – a cost that has not been built into the budget.

“Even though the budget is balanced and we do have the rainy day fund, there do continue to be other risks to the budget that we remain concerned about,” said Bosler.

Taylor told the committee that much of the extra revenue in this year’s budget has already been slated for K-12 schools in order to comply with the Proposition 98[8] spending mandate. “They have brought up their revenue estimates by roughly $2.5 billion – almost all of it goes to schools,” he said.

“For some [legislative] members and a lot of people out there in the public, they have a hard time understanding how that can be. ‘How come there’s no money available for other priorities in the budget?’ You’re going to have to explain to your advocacy groups and constituents why is it that you can have funding going up by $4 billion and none of it’s available for non-98 purposes.”

Taylor warned this year’s budgetary boom could actually lead to a bust in future years.

“If we have this kind of revenue surge, you’re going to permanently increase your [Prop.] 98 obligations,” he said. “If it’s a temporary surge and your capital gains and other revenues fall down to lower levels in subsequent years, you could actually be worse off in your 98 budget. Because you would be committed to higher 98 spending and won’t have monies left over, and may actually have to take a hit to your non-98 portion of your budget.”

Despite the cautionary advice, most of the committee Democrats argued for spending more money on expanding social-service programs. They were led by Committee Chair Shirley Weber[9], D-San Diego.

“This state still suffers from a high level of poverty,” she said. “California has the highest rate of poverty of any of the states in the nation. We have thousands of underemployed and unemployed Californians who should be contributing to our economy today. And we have thousands of children who are home who should probably be in early child development programs for learning. This is an unfunded poverty liability.

“Last year’s budget demonstrated the fact that we do have the capacity to do some of those things to address some of the poverty issues in this country and begin rebuilding California in a stronger and more thoughtful way.”

She was seconded by Assemblyman Kevin McCarty[10], D-Sacramento, who said, “I know there’s a lot of angst that not enough was done in this budget to reinvest in critical programs in California.” He argued for more funding for early childhood education, noting that only 4,000 slots are opening up this year in the program, despite interest from 25,000 families.

Assemblywoman Nora Campos[11], D-San Jose, also argued for more funding to address poverty, especially for preschool children. “Child care, child investment development – this is a priority for quite a few members in the Assembly,” she said. “When we talk about investing in K-12, there’s also a huge movement on what we are doing to invest in [ages] one-to-four to one-to-five. So that by the time they get to K[indergarten] they are ready to move forward.”

Assemblyman David Chiu[12], D-San Francisco, wants to provide state funding for affordable housing: “The governor mentioned that housing growth has slowed at the same time housing prices have increased significantly around the state. California is the second least affordable state in the country. Many parts of the state are in the midst of significant affordable housing crises.”

Bolser, noting that an affordable housing project in San Francisco cost $500,000 per unit, said that it would be quite expensive tackling that problem throughout the state. “This is obviously something you could put a lot of money into and would not make a very large dent in the problem,” he said.

The Assembly and Senate budget subcommittees will spend the next four months studying and revising the budget. The California Constitution requires the budget to be passed by June 15.

According to Proposition 25[13], which state voters passed in 2010, only a majority vote of each house of the Legislature now is needed to pass a budget, except for tax increases.