Sanchez vs. Harris to replace Boxer? 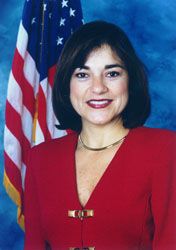 When I was at the Orange County Register, we met with her numerous times. We disagreed on many issues. But she is a delightful, even fun person.

Sanchez first was elected to the U.S. House of Representatives in 1996 in a disputed election[2] against boisterous conservative Republican Bob Dornan, the incumbent. But the real reason Dornan lost was that he spent much of the early election season tramping through the snow in New Hampshire in a Quixotic bid to become president. Meanwhile, Loretta — as everybody calls her — was knocking on doors and going to Kiwanis meetings in the California sun.

The district in central Orange County was trending Democratic anyway because of immigration. But Dornan could have held on for one or two more election cycles if he had taken care of business at home.

Loretta would bring some benefits to the race that Harris doesn’t have. She would be the first U.S. senator in more than two decades from Southern California, which has 2/3 of the state’s population. The two current senators from the Golden State, Barbara Boxer, who is retiring, and Dianne Feinstein, both hail from tony Marin County. And Harris is the former district attorney for mega-expensive San Francisco.

By contrast, Loretta knows well the working-class folks of Southern California who struggle in her own district. She is somewhat more moderate than most Democrats in the House, although she supported Obamacare and other parts of the president’s liberal agenda. In any case, Loretta almost certainly would be less liberal than Boxer has been, or Harris would be.

Loretta also would be highly attractive to the state’s increasingly important Latino voters, who currently are not represented in the state’s three top offices: governor and two senators. The odds-on favorite to be the next governor is Gavin Newsom, the former San Francisco mayor.

California also now has the Top Two system, which was designed to help more moderate candidates like Loretta because any voter can vote for any candidate. In the primary in 2016, Harris might appeal to the more liberal elements in the Democratic Party. But Loretta could appeal to moderate Democrats, independents and even some incumbents.

At a minimum, a Sanchez-Harris race would give voters a choice and prevent a coronation.