Food stamps up in CA, down in Kansas 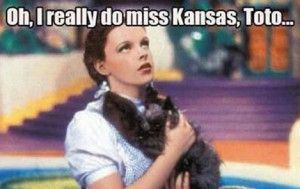 Despite the economic recovery, poverty is increasing in California. It’s one of the few states to see an increase in the use of the Supplemental Nutrition Assistance Program (food stamps), according to new data [1]from the U.S. Department of Agriculture.

Kansas is significant because there has been a national debate, including on this website[2], of Gov. Sam Brownback’s tax cuts, which have produced budget cuts to anti-poverty programs, while also bringing deficits. In particular, economics writer David Cay Johnston, in Al Jazeera[3], excoriated Browback and Kansas and praised California for raising taxes. Johnston wrote:

“Now, thanks to recent tax cuts in Kansas and tax hikes in California, we have real-world tests of this idea. So far, the results do not support Laffer’s insistence that lower tax rates always result in more and better-paying jobs. In fact, Kansas’ tax cuts produced much slower job and wage growth than in California.”

I showed evidence contradicting that contention in the original article[4]. Now we have even more evidence the Kansas tax-cut model, much more than the California high-tax model, better helps poor people. Well, how then can cutting government programs for the poor help the poor? Because lower taxes mean businesses create more jobs — for everybody, including the poor.

Well, at least in California, in Coastal areas the poor don’t have to buy heavy winter clothing.