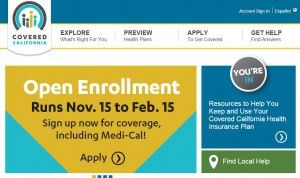 After posting some of the biggest numbers in the Obamacare firmament, Covered California is putting the squeeze on Golden Staters. Amid concerns that bureaucratic and administrative rules will reverse initial gains, the statewide exchange is stressing the substantial increase in tax penalties facing Californians who don’t get insurance.

Meanwhile, choices for coverage are shrinking, not expanding.

In order to hold down spikes in the cost of care, Obamacare included insurance subsides calculated according to a family’s expected yearly income. In keeping with federal tax practices, if a family’s actual income exceeds the estimated amount, their subsidy shrinks accordingly — regardless of whether it leaves them in the hole.

According[1] to the Los Angeles Times, analysts now predict that as many as half of all families enrolled and subsidized under Covered CA could face a bill this tax year.

The implications are so serious that Covered CA executives are on edge. They’ve had to pivot swiftly from public relations mode — pushing a traveling awareness campaign designed to boost enrollments — to public warning mode.

“As the health law’s second open enrollment period draws to a close, Covered CA , the largest of the state-run health insurance exchanges set up under Obamacare, is about to start emphasizing the tax penalties one can incur by not getting covered,” Reason’s Peter Suderman observes[2].

“As the penalty increases,” Covered CA Executive Director Peter Lee said[3] in a statement, “it makes more and more sense for those who have been waiting on the sidelines to get in and get coverage.”

Toby Douglas, director of the Medi-Cal management organization DHCS, put it more bluntly. “This is an important message that should be heard by Californians of all income levels,” he said. “Applying for coverage not only gives you an opportunity to get comprehensive health care; it can help you avoid a penalty that could hurt you and your family.”

The federal picture is not the only one that matters in California. It turns out that Medi-Cal faces a simultaneous reduction in state reimbursement rates. As David Gorn notes[4] at California Healthline:

“The 10 percent rate cut, approved by the California Legislature in 2011, was held up while the matter was thrashed out in court. Last year, the courts upheld the state’s right to reduce provider reimbursement and health care officials decided to implement the cutbacks in phases. The last phase, which includes primary care providers, went into effect Jan. 1.”

That puts pressure on legislators to pour more state tax dollars into funding Medi-Cal. “More than 11 million Californians are on Medi-Cal — more than 30 percent of the state’s population. Raising rates by any amount, given that huge pool of recipients, would be an expensive proposition,” writes Gorn.

The result is a snowballing budgetary problem, not just for families seeking health coverage but for the state of California. It’s bad timing for Gov. Jerry Brown in particular.

Brown has just come off of a fragile but significant political success — debuting[5] an eye-popping budget plan that’s nevertheless been greeted as relatively well-disciplined, if only by California’s profligate standards. Brown has had to carefully balance competing demands for more cash for statewide interests, from environmentalists to the universal pre-K lobby.

Too hard a push for additional health care funding could foster a political crisis that cuts strongly against Brown’s agenda, which is heavy on infrastructure and fiscal management.

Pressure on the left

Adding more wrinkles to the challenge facing Brown, important constituencies on the political left have imposed increasing burdens on the scope of coverage promised under Obamacare. USA Today reports[6] that perhaps half-a-million unlawful immigrants residing in California will soon become eligible for Medi-Cal, while Sacramento Democrats are working “to extend state-subsidized health insurance to everyone, including those barred from getting covered through the Affordable Care Act.”

Meanwhile, some 280,000 Northern and Central California customers have been put on notice[7] that their coverage may collapse or cost more, thanks to a contract dispute that has Blue Shield of California squaring off against the Sutter Health network. Sutter, earning the sympathy of liberals, insists Blue Shield is to blame for slashing reimbursements and expecting Sutter to somehow absorb the costs.

But the controversy is poised to remind Californians of the intra-party divisions that had Democrats at odds in November over Proposition 45[8], which would have given the state insurance commission the power to negotiate rates with insurers, including Covered CA itself. Voters rejected it, 59 percent to 41 percent.

Prop. 45 was backed by Insurance Commissioner Dave Jones, who was re-elected to his job, and billionaire hedge-fund investor Thomas Steyer, who is contemplating a bid for the U.S. Senate.

Opposition[9] included Diana Dooley, the head of the state’s Health and Human Services Agency and chair of Covered California, a Brown appointee, and the Service Employees International Union, a key Democratic power center.