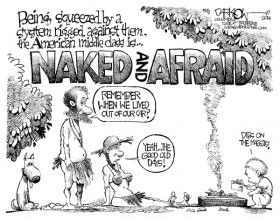 California is a place where middle-class jobs are vanishing faster than a politician’s word of honor.

But it’s not surprising President Obama discussed this problem in last night’s State of the Union Address. His solution [1]has three parts:

1. Raise taxes on the wealthy — that is, investors. Which would mean less investment in business and jobs creation.

2. Trickle a little back to the middle class.

The United States has seen a remarkable turnaround in manufacturing employment since the economy bottomed out five years ago — but California hasn’t.

The state has been among the slowest to recover jobs in an industry long viewed as a bastion of middle-class opportunity.

Since February 2010, U.S. manufacturing employment has increased at a rate of 6.7%, with some Midwestern and Southern states such as Indiana and South Carolina seeing gains of 15% or more. By contrast, California manufacturing has grown at about 1% over the same period.

Manufacturing jobs are good, middle-class jobs, for both skilled and unskilled folks. But we’re not getting them here.

The Times quotes Jordan Levine, director of research at Beacon Economics in Los Angeles: “It comes down to housing costs and the costs of doing business in California overall.”

An obvious culprit is AB 32, the Global Warming Solutions Act of 2006[2], which places immense new burdens on businesses. It also just increased gas prices for  everybody beginning Jan. 1.

The price increase is hidden because of the global and national declines in oil and gas prices. But compare these national prices today from GasBuddy.com[3]:

California drivers obviously are being ripped off big time by their own government. Like Texas, California also is a major oil-producing and -refining state. So why does a gallon of petrol cost a dollar more in San Fran than Lubbock?

The high cost of gas also hurts most the poor and middle class who have long commutes — something itself often caused by the high cost of housing. A worker making $50,000 in L.A. often has to live out in Riverside just to pay the rent, forcing a long commute at high gas prices.

But the president, to be echoed by most California Democrats, insists the real problem is that rich investors aren’t taxed enough.