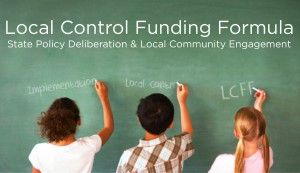 The state Legislative Analyst’s Office released a report[1] last week on how 50 California school districts were dealing with the requirements of the 2013 Local Control Funding Formula law. That’s Gov. Jerry Brown’s ballyhooed reform measure that is meant to devote more school resources to helping individual English-language learners and other struggling students. Brown has said repeatedly that California’s future will be much worse if so many young people enter the work force unprepared to be productive citizens. He stressed that there would be careful controls to make sure the extra funding given to districts with many English-language learners actually directly helped the learners.

But education reformers warned that pent-up demand for raises from powerful local teacher unions could lead school boards and superintendents to divert LCFF dollars to compensation.

The LAO report[2] doesn’t come out and say that is what is happening. Instead, it implies many districts appear to be going through the motions and trying to create the appearance of compliance.

The whole point of the law, remember, is to provide direct, tangible, quantifiable additional assistance to English learners and struggling students. That this intent is not being honored is plain in two of the LAO’s key conclusions:

Districts Rarely Differentiate Between New and Ongoing Actions. In most LCAPs, we found that districts are not distinguishing between actions that are a continuation of efforts from the prior year and those that are new for the upcoming school year. Without such differentiation, we could not determine whether districts were using the new funding generated under LCFF to pursue new actions to improve performance or to continue or expand prior activities.

Districts Often Fail To Provide Sufficient Information on EL/LI Student Services. Often, districts’ descriptions of services for EL/LI students consist only of recapping the actions they will pursue on behalf of all students and indicating those actions also will benefit EL/LI students. In addition, few districts provide clear or compelling rationales for using their supplemental and concentration funds on a districtwide and schoolwide basis.

A reform? Or a disguised political favor?

This gets to a point that Cal Watchdog and nearly nobody else in the California media has made since the LCFF moved quickly through the Legislature to enactment two years ago. If this was the biggest change in state education policy in nearly 20 years — since classroom-size reduction agreed to by Gov. Pete Wilson and the Legislature — it was unlikely to pass without the tacit support of the California Teachers Association and the California Federation of Teachers, the most powerful special interests both in the Capitol and in most cities around the state.

It is difficult to look at the failure of local school districts to properly account for LCFF dollars and not wonder if what was billed as reform was actually a way to do a disguised favor for the urban and Central Valley chapters of the CTA and CFT — the ones with the most English-language learners.

The LAO said that some of the 50 school districts it surveyed tried harder than others to meet the letter of state law with the funds. But how many of the 50 actually complied with the law’s requirements?

The LAO said not a one.