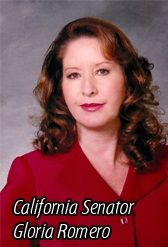 “Independently planned by a diverse and growing coalition of individuals, schools, and organizations, National School Choice Week features thousands of unique events and activities across the country. The Week allows participants to advance their own messages of educational opportunity, while uniting with like-minded groups and individuals across the country.”

California is a mixed bag on school choice. It has been a leader in charter schools, which are public schools that operate without most of the red tape of regular schools. According to the California Charter Schools Association[2], the number has grown from 31 in 1994, the first year they were allowed, to 1,130 in 2014.

Another development is the Parent Trigger Law, authored by former Democratic state Sen. Gloria Romero of Los Angeles. It allows a majority of parents in a failing school to “fire” the administration, and start over on a more successful model.

It has succeeded in a couple of cases, including Desert Trails Preparatory Academy in Adelanto[3].

But it has faced numerous challenges. It just overcame one. Romero wrote last month in the Orange County Register[4]:

“The California Senate Legislative Counsel issued last week a sweeping opinion, concluding a controversy as to whether a school district – Los Angeles Unified, in this case – can proclaim itself exempt from California’s historic Parent Trigger law….”

She quoted the Leg Counsel:

“[T]he legislative intent in enacting [the law] … was to allow parents or guardians of pupils enrolled in schools that have been underperforming … to request specified interventions. It would be inconsistent with that legislative intent to conclude that … [they] … are deprived of the remedy set forth … on the basis that a school district has received a federal waiver whose purpose is to relieve that district solely from compliance with federal performance requirements. [I]t is our opinion that the … waiver … does not exempt that school district from compliance with the [law].”

And she noted a controversy in Anaheim:

“parents at Palm Lane Elementary School in Anaheim are mobilizing to turn around their school. Already they have faced obstacles imposed on them by some hostile school board members and school officials, but the parents have surmounted each obstacle and could become the first parents in Orange County to succeed in using the Parent Trigger law on behalf of their children.

“At a time when too many people complain about the lack of parent involvement in their kids’ educations, these parents should be celebrated as everyday heroes.”

However, the school voucher program active in several states has not done well here. It gives each student a voucher, or scholarship, to the school chosen by him and his parents. The school could be public or private.

That’s probably a lost cause here for school-choice fans.

But overall, parents do have more choices in California for their kids’ schools than 20 years ago. Charters are secure and spreading. And the Parent Trigger Law has survived legal challenges, albeit its progress remains slow.