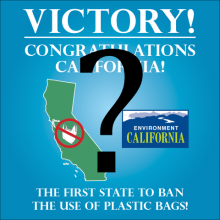 [1]The effort to repeal the state’s looming prohibition on plastic grocery bags is projected to have enough valid signatures to move the initiative forward, according to a random sample [2]of the signees compiled by the California secretary of state’s elections office.

The sample accounting projects 589,439 voters would like to see the bag law put to a vote, according to an analysis of the early sample by CalWatchdog.com.

Counties can provide early random samples of signature validations before the due date of Feb. 25. Several counties, including Los Angeles, Contra Costa and Fresno, have not yet competed their samples.

The plastic bag industry submitted petitions with 809,000 signatures in December, more than the required 505,000[3] needed to force a referendum in Nov. 2016.

The law was signed by Gov. Jerry Brown in Sept. 2014. If it goes into effect, larger stores would no longer be able to use the bags beginning this summer. The ban would begin for smaller volume stores in July 2016.

If if the repeal initiative officially makes it onto the Nov. 2016 ballot, its qualification would delay the bag ban’s summer 2015 implementation until voters decided whether to keep the ban, or throw it out.

Records show advocates for the proposed referendum to overturn the ban have $3.2 million. A large number, $1.7 million, came from Hilex Poly, a South Carolina-based plastics firm, according to its latest campaign finance filing[4]. The company was recently absorbed by NOVOLEX.[5]

Hilex Poly donated a total of $1.8 million last year[6] in California. The expenditure also included $40,000 to the Democratic State Central Committee of California, which has received Hilex money in the past.

Financing for the effort to overturn the legislation has come primarily from out-of-state donors like Hilex. Of the $3.2 million raised from nine donors[7], two are from California: Tustin-based Durabag gave $50,000 and Crown Poly in Huntington Park gave $12,000.

Additionally, the American Progressive Bag Alliance, a lobbying group for the plastics industry, continues to take in cash from large plastics companies. That cash infusion includes $680,000 from three Texas-based manufacturers[8] in December alone.

“It’s expensive to fight, but California is important,” said Jon Berrier, a spokesman for the American Progressive Bag Alliance. “It’s one of those states where a policy is adopted and other states will look to it and see if it is something they want to do.”

The major foe of the referendum is a conglomerate of environmental and grocery groups led by Californians Against Waste[9], which has formed a 501(c)(4) group, Protect the Plastic Ban[10], which reported $19,000 in donations in its first filing on Monday[11].

PPB’s largest donation so far is $2,500 from Chicobag, a Chico-based maker of reusable bags.

Another group launched Monday, California vs. Big Plastic[12], was funded with $9,000 from Californians Against Waste.

“We fully expect this to go to a vote, based on the signatures that were submitted and the numbers we are hearing,” said Mark Murray, executive director of Californians Against Waste.

Murray expects to need $10 million even to stay competitive with what he projects will be $40 million raised by repeal supporters.

“We will be relying on big environmental donors,” Murray said.

The referendum shapes up as a contest between two titans of respective industries – environmentalism and plastics – and all the formidable money and politicking each is capable of.

The law is the first statewide ban on plastic bags in the U.S., although 150 municipalities in the state have imposed their own prohibitions.

Other towns, cities and counties around the U.S. have passed bans, including Austin, Tex.; Chicago, Ill.; Washington, D.C.; and Montgomery County, Md.

The majority of the bans were put into place by a vote of elected officials, rather than a popular vote. Challenges such as the one in California have had mixed results.

Voters in Issaquah, Wash., rejected a challenge[13] to a city-approved bag ban in Feb. 2014, one of the few places the ban has been put on a ballot.

City councils in Homer, Alaska, and Basalt, Colo., enacted plastic bag bans in 2012, which voters turned back[14] in both cities[15].

Voters in Durango, Colo., also voted down[16] an ordinance approved by the city council that required grocers to charge 10 cents for a plastic bag in 2013.

California, though, has seen relatively clear sailing on municipally imposed bag policies. Most of the bans in place in the state cover grocery stores. But some also extend to drug stores and restaurants. Many require or allow a 10 cent charge for paper bags.

A ban on plastic in Los Angeles County was met with legal action from agents of the plastics industry. Four residents and Hilex Poly sued the county[17], claiming a bag ban requiring merchants to charge for a paper bag amounted to an illegal special tax because it was not approved by voters as required by state law. They lost the case.

The city of Huntington Beach banned plastic bags in 2012. But a new city council is working to repeal [18]that ban.

The city of Carpinteria was forced to pay attorney’s fees in a case filed by pro-plastic bag activist Stephen Joseph, a Los Angeles lawyer, who sued the city for including restaurants in its plastic ban. He claimed state health and safety codes trump a municipality’s ability to regulate businesses. He was awarded $11,500 in fees and the city rescinded the restaurant requirement[19].

Joseph, dubbed in a Time magazine headline[20] as “the Patron Saint of Plastic Bags,” has sued several other cities over bag bans.

He declined to speak about the statewide bag ban.