California continues to enjoy fairly strong jobs growth — but new data released today (not yet online) by the A. Gary Anderson Center for Economic Research at Chapman University suggest caution may be warranted moving forward.

The California Employment Indicator declined to 121.6 in the first quarter of 2015 from 124.2 in the fourth quarter of 2014, a drop of 2.6 points. The Indicator includes such variables as movements in the lagged values of real GDP, real exports, the S&P 500 and California’s total construction spending.

Any number above 100 indicates jobs growth. So the news generally remains positive. The slight decline to 121.6 still is well into positive territory. And it’s certainly than the 46.6 the Indicator plunged to in 2009 during the trough of the Great Recession, as shown in the following graph: 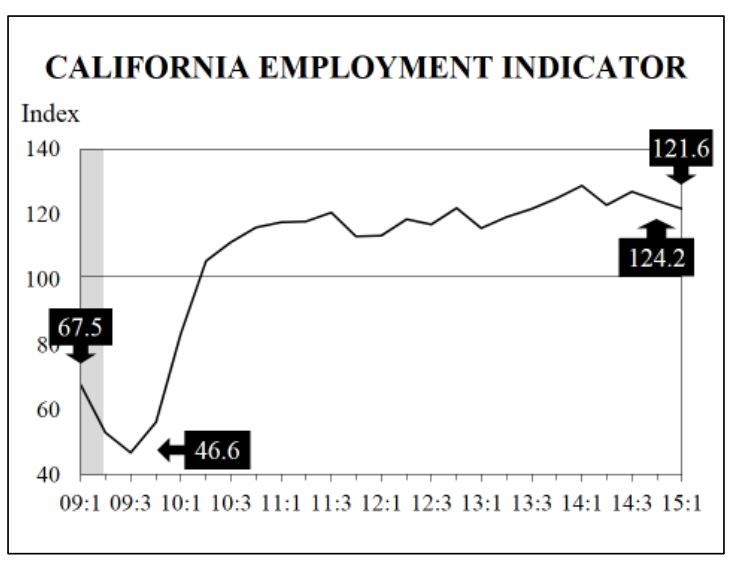 The slight decline “is a little bit cautionary,” Esmael Adibi told CalWatchdog.com; he’s an economist and the director of the Anderson Center.

He said that, historically, the Indicator closely reflects the growth or decline in state jobs, “but not necessarily every downtick and uptick” in the data. A couple more quarters will be needed to see if this really is a worrisome trend, or just a jiggle in the data.

“I would not like it to be a trend,” he said. “Still, we’re over the 100 threshold” indicating continued jobs growth. 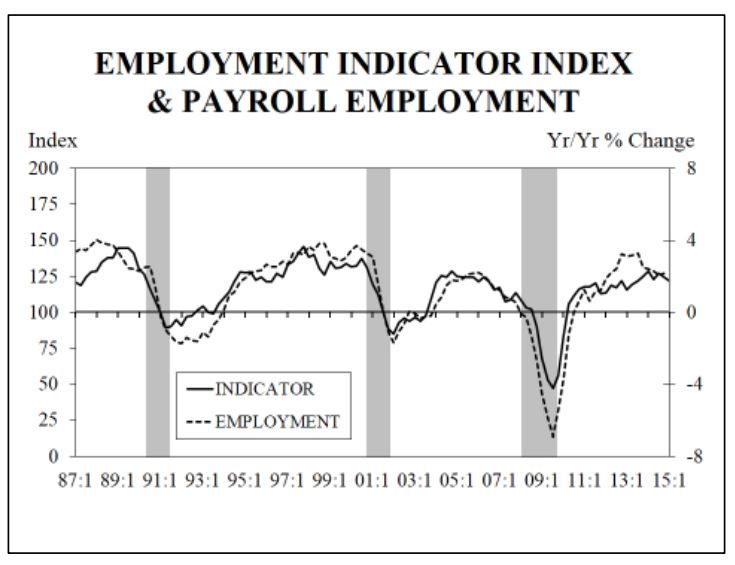 Adibi added that, if the downward trend in the jobs Indicator continues, “jobs creation still will be positive, but the rate of growth will be slower.

He said the California and U.S. economies continue to perform pretty much as Chapman’s 37th Annual Economic Forecast expected last Dec. 3, as CalWatchdog.com reported at the time[2].

“Consumers are in good shape,” Adibi said. “They’re driving the economy more than exports. GDP is up 3 percent, as we forecast. And we still are bullish on jobs creation of about 2 percent, which is respectable.”

The growth in the stock market (despite recent setbacks[3]) and the housing market are causing a “growth effect.” That’s when growth in asset values leads some people to cash in their profits and use it for spending or investing.

Adibi also tagged the cut in gas prices drivers are enjoying as being “like a tax cut.”

Although for California, the new tax at the pump from the cap-and-trade[4] portion of AB32, the Global Warming Solutions Act of 2006, has stunted that effective “tax cut” and its salutary effects.

According to GasBuddy.com, [5]today’s average price for regular gas in California was $2.49 a gallon, the third highest for any state, after $2.63 in Alaska and $3.11 for Hawaii.

Despite the generally good news, California is not the state of Pollyanna. “There always is the message not to raise taxes or hurt the economy in other ways,” Adibi warned.