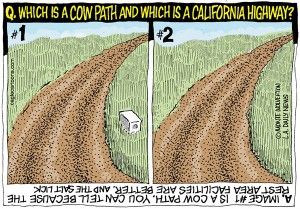 No question California’s roads are close to those in Iraq. The only makes car repair shops happy.

Gov. Jerry Brown and the Legislature now are looking at taxing cars by the mile, instead of at the pump. Reported KPCC[1]:

California lawmakers are looking at new ways to pay for crumbling roads, bridges and highways as the traditional repair fund from gasoline taxes dries up.

Gov. Jerry Brown’s administration is studying whether to tax drivers by miles traveled instead of gas guzzled. Changing the system could take more than five years, and lawmakers are calling for more money to repave roads and fill potholes in the meantime.

A big problem with the proposal is a tax on miles would both invade privacy and encourage cheating on odometers.

Part of the problem, too, is that the state government for decades now has siphoned off funds from highways to the general fund. Both federal and state governments insist on the vast waste known as high-occupancy-vehicle lanes — diamond lanes. And efforts to privatize expressways are resisted.

Then there’s SB 375, the Sustainable Communities and Climate Protection Act[2] of 2008. It was sponsored by then-state Sen. Darrell Steinberg, and signed into law by then-Gov. Arnold Schwarzenegger.

It encourages mass transit — not roads — and jamming people into high-rises. So it actually is state policy to discourage driving.

Do we need any other reasons why the roads are falling apart?