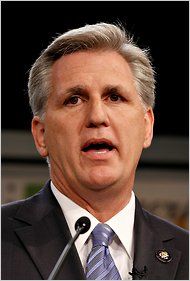 A former state legislator, McCarthy came back to his home state to address the Town Hall of Los Angeles.

When he learned Boxer was not running for reelection, did he even for a moment consider running for the seat? McCarthy said he did not want to go to the back of the line. In other words, he had no desire to abandon the powerful majority leader’s post to become a new senator with less influence.

Divided government? McCarthy expressed the hope that, with the president of one party and Congress controlled by the other party, they could find common ground. As models to follow, he cited the accomplishments of Republican President Ronald Reagan working with Democratic House Speaker Tip O’Neil in the 1980s and Democratic President Bill Clinton working with Republican House Speaker Newt Gingrich in the 1990s.

To reach solutions, McCarthy said he didn’t need to get 100 percent of what he wanted. He expressed his goals for Congress as seeking freedom, opportunity and accountability. But he said he wasn’t interested in top-down solutions and pointed to California’s Silicon Valley as a success built from the bottom up.

Issues he hoped to reach compromise on were human trafficking, cyber security, transportation and the Keystone XL pipeline. The latter may be a pipe dream since the president has already promised [1]a veto.

Addressing California issues, McCarthy supported the opening of the Monterey Shale deposit for oil and emphasized trade as a strength for California, bemoaning the strike called for the ports[2].

Even as McCarthy was speaking, U.S. Department of the Interior Secretary Sally Jewell was in Sacramento holding a press conference [3]with Gov. Jerry Brown announcing a $50 million drought response program for the Western states, with the lion’s share headed for California.

McCarthy responded to the secretary’s visit, “Until the administration recognizes the underlying problem of federal and state regulations preventing our communities from getting the water we desperately need, no amount of spending will solve our crisis.  … I hope that, while Secretary Jewell is in the Valley, she will spend some time with our farmers who have been devastated by regulations that put fish over people.”

And, yes, the majority leader is still opposed to the high-speed rail project. When asked for an alternative transportation plan, McCarthy suggested California consult with Elon Musk.

Unfortunately, it appears billionaire entrepreneur Musk is planning to build his hyperloop test track in Texas[4].