Yesterday Democratic leaders in the California Senate introduced [1]a series of bills to move the state to a goal of 50 percent renewable energy by 2030. That would be an increase from the current goal of 33 percent by 2020. 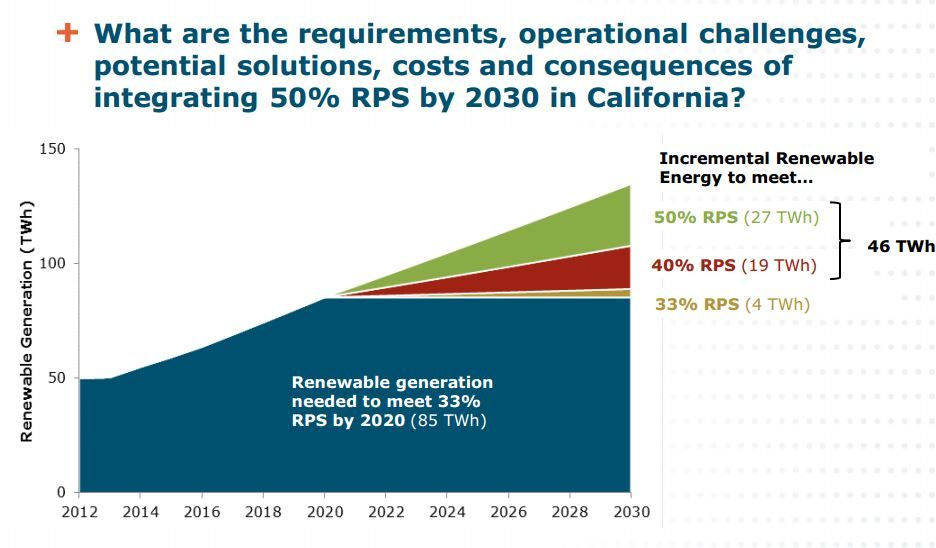 So, what’s the cost?

In Oct. 2014, the Little Hoover Commission[4] asked Brown to account to Californians how much would be the cost of implementing the 33 percent standard by 2020, as mandated by AB32, the Global Warming Solutions Act of 2006.  Thus far, Brown has not answered the question, let alone the cost of the higher 50 percent goal.

But the 50 percent target was looked at in a 2014 study, “Investigating a Higher Renewable Energy Portfolio Standard in California.”[5] The study was conducted by Energy-Environmental Economics Inc. for the five largest California electric utilities: Southern California Edison, Pacific Gas & Electric, San Diego Gas & Electric, the Sacramento Municipal Utility District and the Los Angeles Department of Water and Power.

The study has received little attention due to its highly technical content. Southern California Edison failed to respond to a request for information.

But to clarify the study, CalWatchdog.com contacted Arne Olson[6], E3’s lead investigator in the areas of energy policy and planning. He also prepared a slide presentation[7] of the E3 study.

The question: How much will power rates rise by 2030?

Olson replied in an email:

“Our study projected a 47 percent increase in electric rates between 2012 and 2030 under current policy.  That includes an increase of about 7 percent that can be attributed to the 33 percent RPS (Renewable Portfolio Standard) policy, and 40 percent due to other factors such as replacement of obsolescent natural gas power plants, San Onofre nuclear power plant replacement, load growth, etc.

“The study found that a 50 percent RPS policy would result in an additional increase of 9-23 percent, or 2-5 cents/kWh (kilowatt hour), depending on the renewable portfolio, in 2030 relative to the current policy baseline.  This increase could be mitigated to 4-8 percent, or 1-2 cents/kWh, if the state also pursued renewable integration solutions such as increased regional coordination or flexible loads.”

According to the E3 study[8], moving to a 50 percent green power standard also would entail the following potential risks and problems:

There are other considerations outside the scope of the E3 study: