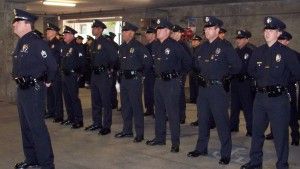 A CalWatchDog.com review of the website[1] of the Los Angeles Police Department found it has updated its reports on discipline and use of force after criticism for posting aged data in the aftermath of federal oversight.

It also now takes just one click to go from the department’s landing page to the reports. The most recent annual use-of-force report now covers the first half of 2014.[2] The site now provides a 2013 officer discipline report for the fourth quarter[3].

The website also cites the decree requirement for the posting of the reports, which comes from the 2000 consent decree between the LAPD and the U.S. Department of Justice[4] in the wake of the Rampart[5] scandal in which a gang unit connected to the division was infected with corruption. The decree mandated:

“Under the terms of the agreement with the Justice Department[6], the LAPD was required to make available on its website reports on use of force and complaints to include “a summary of all discipline imposed during the period reported by type of misconduct, broken down by type of discipline, bureau and rank…”

The LAPD, like other law-enforcement bodies around the United States, has vowed to be more open with in its police procedures in the wake of last year’s spate of fatal police encounters with young men in several cities.

On Jan. 22, Cmdr. Andrew Smith, an LAPD spokesman, told the Los Angeles Times[7] the department’s failure to post the reports was “not intentional, and the department would be posting the latest reports.”

Ironically, the LAPD’s lax condition came to light in a Dec. 31, 2014 report on another law-enforcement agency. It was the County of Los Angeles Office of Inspector General’s “Recommendation to the Los Angeles County Sheriff’s Department for Public Data Disclosure[8].”

The report mainly pointed out the county sheriff’s office has been deficient in posting officer discipline action on its website.

But it also revealed the LAPD had not posted its quarterly summary of officer discipline since 2012 or its annual use of force report since 2010. Yet both data sets were supposed to be posted under the terms of the 2000 consent decree with the U.S. Department of Justice that ended in May 2013[9].

The department had failed to post quarterly discipline reports since the 3rd quarter of 2012, seven months before the decree requiring the reports ended. It does not appear, though, that the department violated any oversight provisions.

According to the Inspector General’s report:

“In 2009 and 2010, the LAPD published on its website ‘Annual Use of Force Reports.’ Although it appears this practice was shortlived, these reports were detailed as to statistics on officer-involved shootings, animal shootings, unintentional discharge incidents, and other uses of lethal force or force resulting in significant injury.”

Further, the information was deemed difficult for a viewer to find:

“The Use of Force Annual Report and the Quarterly Discipline Reports were not easily accessible on the LAPD’s website. These reports were found under the subheadings of ‘Police Commission’ and ‘Special Assistant for Constitutional 11 Policing.’ A citizen unfamiliar with these terms and their meaning might find it difficult to find these reports.”

An email to Smith regarding the updated site and the lack of current reports on the website was not returned. And a person answering the department’s media line requested an email query, which was also not returned.

The reports are especially valuable in a state in which all law enforcement disciplinary records are uniquely private, said Peter Bibring, a lawyer with the ACLU of Southern California. “It’s only through these reports that the public has any idea what’s going on,” he said

He understood there can be a lag time as the disciplinary process for an officer runs its course, “but just the number of instances of force should come fairly promptly.”

“The trust between a community and its police department can be eroded in a single moment,” Garcetti said during a press conference to announce the initiative. “Trust is built on transparency.”

But LAPD Chief Charlie Beck said any video coming from the body cameras would not be released[11] under the state’s public records law, claiming the investigative records exemption.

“I think people misunderstand transparency as having everybody and all the public have access to everything,” Beck told the Times. “And it isn’t so much that as having the ability for oversight by multiple entities outside of the Police Department. I think that’s the meaning of transparency.”

In the past, Beck has been more welcoming of a transparent application of policing, although his endorsement of such came with an interpretation of the state’s public records law.

Upon his appointment in 2009, he told a gathering of LA Times editors and reporters[12] that part of being a police officer is the understanding that “you give up some right to anonymity that most other people enjoy. Unfortunately, state law doesn’t agree with me on that.”

In a recent message posted on the LAPD site[13], Beck asserted “trust is built on the truth and truth is displayed through transparency.”