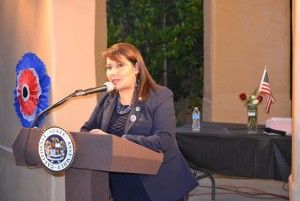 Last November, unknown community activist Patty Lopez[1] defeated a fellow Democrat, incumbent Raul Bocanegra, in the 39th Assembly District. It is — without a doubt — the biggest upset in the history of California’s Top Two primary, which was enacted by voters with Proposition 14[2] in 2010.

Political professionals were left stumped[3] at how Lopez won. In the June 3 primary, Bocanegra beat Lopez by nearly 40 points, the largest margin of any Democrat vs. Democrat primary in Los Angeles County. In advance of the November election, Lopez didn’t report any expenditures or obtain a candidate statement.

It hasn’t taken long for those unresolved questions to turn into vicious smears and an organized effort to unseat Lopez.

Before the first-term state lawmaker could introduce her first bill, angry self-described “progressives” were talking of a recall attempt.

“We cannot wait two years down the line for a chance to rectify the results of misplaced trust and uninformed voting,” Rosemary Jenkins, a Democratic activist and chair of the Northeast Valley Green Alliance, wrote at CityWatchLA.com[4]. “By and large, worthy office-holders must pay their dues first, gaining experience through working their way up the ladder. She has not done that.”

Jenkins even branded Lopez as “functionally illiterate. … As a Progressive, I firmly believe in diversity with all its ramifications, but to be an effective legislator at any level requires fluency in the English language and the ability to communicate well.” (boldface in original)

Jenkins offered as grounds for a recall: Lopez has failed to use her taxpayer-funded office to support patronage jobs for Democratic activists.

“Speaking of the Democratic Party, she, as an elected Democrat, is obligated to hire Democrats as her staff members,” Jenkins wrote. “She has been in violation of this regulation.”

Of course, no such regulation exists and likely would be illegal. Although it’s rare, numerous California politicians have hired staffers of the opposing political party for key positions. Gov. Arnold Schwarzenegger famously hired Democrat Susan Kennedy as his chief of staff. In 2013, then-State Sen. Lou Correa, a Democrat, hired longtime GOP staffer Damon Conklin[5] to serve as a top adviser and lead his communications outreach.

“What Sacramento is finding out about the newly elected Assemblywoman is troubling, to say the least,” Mario Solis-Marich, another blogger angry with Benitez’s hiring, wrote at LAProggressive.com[6].

The pettiness and persistence of the attacks has some constituents questioning whether it’s part of a larger smear campaign.

“It appears that a very well-orchestrated smear campaign has been launched against Assemblywoman Patty Lopez disparaging her ethnic origins, gender, and abilities, while insulting the intelligence of the voters of the 39th Assembly District,” Michael Moncreiff, who lives in Rancho Tujunga, recently wrote at CityWatchLA.com[7]. “All these disrespectful remarks are being callously disseminated one month after the Assemblywoman took office and well before she has commenced her legislative work.”

As recently as mid-January, an attack website accused Lopez of “deceiving voters.” However, the website has recently been taken down and no archived copy was available[8].

The attacks, to a degree, have galvanized support for Lopez.

“She listens to us and is working for our communities instead of the pocketbooks of a few,” Nina Royal, who is active in several community organizations in the district, recently posted on Facebook[9]. “I am confident that she will work hard to make a difference in our District.”

‘I will make sure that everyone’s voice is heard’

Lopez, who declined CalWatchdog.com’s request for comment on the recall attempt, has said she’s interested in representing all people in her district, not just politically connected party loyalists.

“I am no different from many of my colleagues in the Assembly because I ran for this office to improve the lives of people in my district and in California,” Lopez recently wrote[11]. “And as the new representative of the 39th District in the California Assembly, I will make sure that everyone’s voice is heard.”

She added, “I am still learning how everything works in the Legislature.”