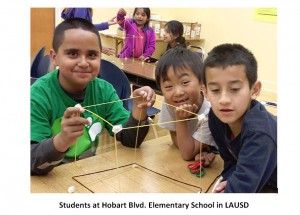 A new report by California Legislative Analyst Mac Taylor puts school facilities funding at the head of the class.

Among other points, “The 2015-16 Budget: Rethinking How the State Funds School Facilities[1]” pushes the idea that facilities funding should more closely follow each student. Doing so would change the system from its current dependence on local variations largely based on community wealth and support for more school funding.

The report is claiming that reforms need “to get schools out from under Sacramento-related oversight and redundancy,” Bill Lucia told CalWatchdog.com; he’s the president and CEO of EdVoice[2], a nonprofit reform group, and served as executive director of the State Board of Education.

Lucia said the report works to address Gov. Jerry Brown’s Local Funding Formula reform[3] from 2013, which shifted overall state funding more to schools from low-income families. However, Lucia added, neither Brown nor the LAO report “addresses head on” Proposition 98[4], the 1988 initiative that mandates about 40 percent of general-fund spending must go to K-14 education.

The LAO, he said, “has put some interesting ideas on the table,” but ultimately “still doesn’t address where the money comes from.”

It notes “the governor indicates a strong interest in changing how the state funds school facilities, though he has not introduced a specific proposal to date.”

And the LAO makes several recommendations for new legislation:

Lucia said the LAO report is “thin” on dealing with charter schools, which are public schools that mostly work outside the state and local schools bureaucracies. According to the California Charter Schools Association[5], the state now includes more than 1,063 charter schools, teaching more than 484,000 students.

The LAO report explained that in 2001 the state established the Charter School Facility Grant Program “to provide facility funding for charter schools serving low-income students. Charter schools are eligible if they enroll or are located in the attendance of an elementary school where at least 70 percent of students qualify for free or reduced-price meals.”

The LAO also warned the state’s bond authority is almost exhausted. The two core programs, new construction and modernization, have been empty since 2012. But $286 million remains in the four bond measures passed earlier: Mainly the money is in three categories:

And according to Ballotpedia[6], a $9 billion school bond has been submitted to Attorney General Kamala Harris for the Nov. 2016 ballot. It is awaiting her title and summary before being circulated for signatures.

A Dec. 2014 poll by Fairbank, Maslin, Maullin, Metz & Associates[7] found such a bond nabbed 63 percent support to 33 percent opposition, with 4 percent undecided. But that’s before any actual campaigning by anti-tax groups worried the bond would lead to tax increases.

“I agree with the governor on that point,” Lucia said.

Lucia added that, despite the importance of local control, the California Constitution actually guarantees a decent education for every child in the state. He believes the LAO report can help spur reforms that, in particular “streamline” state funding of schools, “eliminate redundancy and bureaucracy” and ultimately “bring more bucks to buildings.”