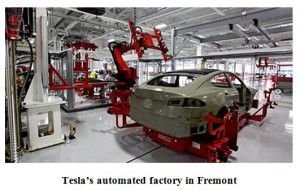 California’s hard-hit manufacturing sector is coming back, although not as much as the rest of the country. The Great Recession sliced off 18.5 percent of state manufacturing jobs.

A big contributing factor, he said, was the sales tax exemption for purchasing manufacturing equipment passed by the Legislature and signed by Gov. Jerry Brown in 2013[2]. “Until then, we were one of the few states that taxed it,” DiCaro said.

It’s too early to see just how much that tax cut will help manufacturing. But DiCaro cited figures that the state has a lot of catching up to do. Since Jan. 2010, California manufacturing has increased just 1 percent. That’s much less than the 7 percent for the United States as a whole — and a whopping 18 percent for Indiana, a Rust Belt state currently inundated [3]by the record cold and massive blizzard hitting the Northeast.

Toyota’s website boasts [4]it employs “4,500 people here at Toyota Motor Manufacturing, Indiana, Inc. (TMMI), and our local suppliers employ thousands more across Indiana. Our $4.1 billion investment in the state of Indiana gives us the capacity to build nearly 300,000 vehicles a year here, including the Sequoia full-size SUV, the Highlander midsize SUV and the Sienna minivan.”

Toyota shut [5]its California NUMMI plant in Fremont in 2010. And last year it announced [6]its U.S. headquarters was moving from Torrance to Texas, costing 3,000 jobs. However, those are office jobs, not manufacturing.

On the positive, the NUMMI plant now builds [7]Teslas. But even there, Tesla chose Nevada over California to build batteries, albeit because California wouldn’t match Nevada’s $1.3 billion in tax breaks[8] — effective subsidies paid by the rest of the state’s taxpayers.

DiCaro also pointed out that, in 2013, the Golden State enjoyed “only 1.5 percent of new or expanded facilities in the United States,” even though our population is 12 percent of the country.

DiCaro said a big problem with California is that manufacturing paid 70 percent higher electricity rates than the rest of the country for electricity before AB32, the Global Warming Solutions Act of 2006[9] began to be implemented in recent years.

Currently, he said, “overall energy rates are increasing” due to AB32’s implementation of the cap-and-trade program[10], which charges companies, such as electricity utilities, for greenhouse-gas emissions that are too high. Also aiding the energy-rate increase is a separate mandate that 33 percent of California electricity must come from renewables by 2020. In his Inaugural Address last month, Gov. Jerry Brown called for an even higher goal of 50 percent renewables by 2030.

The exact cost is unknown. As CalWatchdog.com reported[11], “Brown recently was rebuked by the Little Hoover Commission[12] for failing to disclose to Californians how much the price tag will be for renewable power in California.”

DiCaro fingered a particular problem. California still is the home for venture capital that funds amazing startups. But when such companies succeed “and want to scale up big time, the overall high energy rates become a significant impediment for a large manufacturer.”

The good, the bad and the weather

DiCaro urged that the manufacturing picture in California has its positive points:

The bad points that need to be worked on:

On the latter, Greg Jones, western bureau chief of the Work Comp Central news site, reported on Feb. 19[14], “A flurry of legislative activity next week is expected to present California lawmakers with questions about the state workers’ compensation system that are bigger than whether sports teams should be required to provide coverage for cheerleaders.”

The 2004 reforms[15] signed into law by Gov. Arnold Schwarzenegger since have been eroded, again putting California at a disadvantage for other states.

Along with the 2013 sales tax cut for manufacturers, serious work comp reform could indicate the state at least is trying to move its business climate in the direction of its balmy weather climate.