A helmet law for bicyclers? 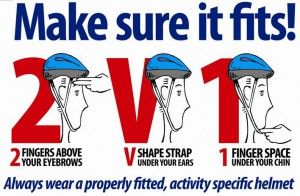 No question wearing a helmet makes bicycle riding safer, much as for motorcycles.

But how much of a Nanny State do Californians want? Motorcycles go much faster, usually are in traffic and are driven by licensed adults.

Bicycles are driven by everyone, but that includes young children literally using training wheels. Current state law mandates that anyone under age of 18 must wear a helmet while riding a bike, or get hit with a $25 fine. But a look around shows it’s roundly ignored.

“would require every person, regardless of age, to wear a bicycle helmet when operating a bicycle, riding on a bicycle as a passenger, or riding in a trailer towed by a bicycle. The bill would also require a person engaged in these activities in the darkness to wear retroreflective high-visibility safety apparel, as specified.”

“Because a violation of this requirement would be a crime, the bill would impose a state-mandated local program.”

It’ll be interesting to see if SB192 goes anywhere in a Legislature already ridiculed for enacting close to 1,000 new bills every year, although “just” 754 last year[2].