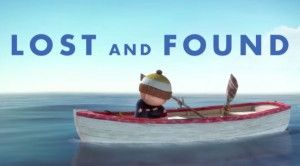 California needs to find ways to improve its lost-and-found[1] program.

Taylor said the state could do a better job of finding owners, instead of passively waiting for the cash to be claimed. His report also raised the question of whether the state has a conflict of interest in managing the program.

Under state law, when there’s been no activity on an account for three years, financial institutions are obliged to report this unclaimed property to the California Controller’s Office. In turn, the controller holds the funds, commonly money from a forgotten bank account or insurance settlement, until it is claimed by the owner.

Controller Betty Yee has a special web page[4] to help find lost property. It urges, “You may be one of millions of Californians owed money by the State!” The search engine is here[5].

Among the biggest problems facing the state’s unclaimed property program is a lack of public awareness about where people can find their old property.

“To begin with, the name itself — unclaimed property — is not very user-friendly,” the report[6] said. “It likely prevents potential claimants from quickly understanding the program. The poor branding is likely made worse by limited state efforts to increase public awareness of the program.” 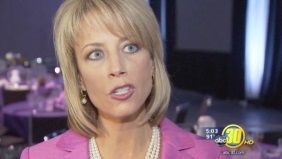 Even state leaders aware of the program’s existence, such as former controller candidate and Fresno Mayor Ashley Swearengin[7], don’t bother to routinely check and then collect small sums held by the state.

Gov. Jerry Brown has $61.26 in cash from the sale of shares formerly held by US Bancorp. The address for Brown in the database matches an Oakland address for his “We The People[8]” organization.

There are also unclaimed cashier’s checks for “Kamala Harris[9]” and “Gavin Newsom[10].” But, without any addresses listed, it’s unclear whether the $200 and $40, respectively, are owed to the attorney general and lieutenant governor by the same names. 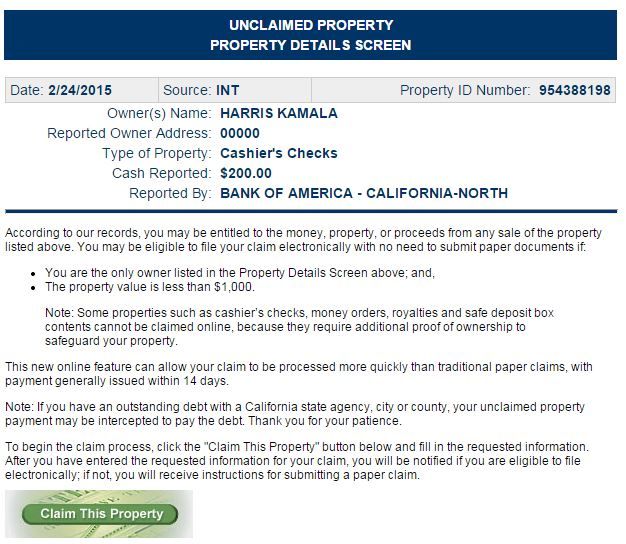 Missing addresses are only the beginning of the problems with the state’s unclaimed property database. Inaccurate information, such as misspelled city names, can prevent owners from finding their properties in the database. For example, the city of “San Bernardino” has at least 18 different spelling variations.

In addition to allowing the controller’s office the authority to clean the database, the Legislative Analyst’s office recommends the Legislature approve an upgrade to enhance search capabilities. Other states’ databases, such as Virginia’s unclaimed property database, include an address suggestion feature.

“Virginia’s database seems more effective than California’s, particularly for users living in large cities, who have common names, or who have lived at many addresses,” the report noted.

Other website upgrades could include an automated email, similar to a Google Alert, to notify Californians when new property is reported to the state.

Other recommendations for improving the program include:

Although the report dished out plenty of criticism, it also praised the controller’s office for its new eClaim feature. The new streamlined process for accounts valued at less than $500 was the product of John Chiang when he was controller from 2007 to 2015. He now is the state treasurer.

Roughly 90 percent of the 28.4 million properties held by the state are valued at less than $500.

In a statement[11], Chiang welcomed the report’s recommendations:

“The LAO has detailed many of the innovations and reforms which fueled an 8-year revival that wrestled away from past lawmakers a program that was hijacked to pay for their own spending priorities and, importantly, restored its original purpose of reuniting property with their rightful owners,” Chiang said. “I strongly support the LAO’s overarching message urging lawmakers to fight the instinct to oppose changes and investments which benefit consumers, even if those changes reduce money from California’s 5th largest revenue source.”