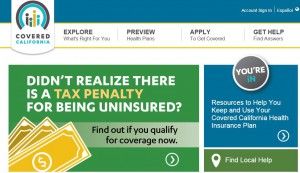 Originally the deadline to sign up was Feb. 15. But Covered California, the state’s implementation of the Affordable Care Act, now is extending the deadline to April 30. According to the program’s website[1]:

SACRAMENTO, Calif. — Covered California is offering a special enrollment opportunity for consumers who did not know or understand there was a tax penalty for being uninsured in 2014 or who learned they may face a penalty for 2015.

“For the first time, health care and taxes now are linked arm in arm,” Covered California Executive Director Peter V. Lee said. “The law requires everyone to be insured, and if you’re not, you may face a significant financial penalty when you file your taxes this year.”

From Feb. 23 until April 30, 2015, consumers are eligible to apply for health coverage during special enrollment by attesting that they did not realize there was a tax penalty. To attest to this fact, they can select “Informed of Tax Penalty Risk” when filling out an application at CoveredCA.com.

The new deadline also comes two weeks after the April 15 deadline for filing income tax forms, and paying any back taxes, to the IRS. Covered CA’s announcement recognizes that this will be a big spur to action:

The new tax penalty for being uninsured — known as the “shared responsibility payment” — motivated many consumers to purchase insurance this year during the Nov. 15-Feb. 15 open-enrollment period via Covered California. Unfortunately, many people who are supposed to purchase insurance may be unaware of the penalty and surprised when they go to their tax preparation professional for help. …

For the first time, consumers who are filing their taxes this year may be paying a penalty for not having health insurance. And the penalty for going without insurance in 2015 will go up significantly: Those who can afford insurance but choose not to buy it will be subject to paying $325 per adult in a household or 2 percent of their income, whichever is greater.

Veterans may be exempt

The Covered CA announcement does not mention it, but there is an exemption for U.S. military veterans. The federal Veterans Administration website advises[2]:

You do not have to pay a fee if you have coverage that meets a minimum standard (called “minimum essential coverage”). VA is required by law to notify the IRS of veterans’ enrollment status in the VA health care system in 2014. Veterans who are not enrolled in the VA health care system and who do not have qualifying medical insurance, unless given an exemption, will be charged a fee beginning on their 2014 federal income tax return, which most people will file in the spring of 2015. The fee is prorated based on the amount of time in the calendar year the Veteran does not have medical insurance that meets minimal essential coverage standards.

Explanations of VA medical benefits, and how to sign up for them, are here[3].