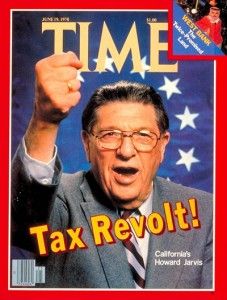 A major component in the fight to keep professional football in Oakland and San Diego or move a team to Los Angeles is taxes: Will taxes be necessary to build a stadium?

Team owners want a public subsidy to help build a stadium in Oakland and San Diego. But two new proposals for stadiums in the Los Angeles area are not tied to any tax proposals.

A tax set aside for a football stadium would be a special tax requiring a two-thirds vote. The two-thirds vote provision was placed in the California Constitution when voters approved Proposition 13[1] in 1978.

City officials are concerned the two-thirds hurdle is too high to clear since voters don’t see using tax dollars for a sports stadium as a top priority.

According to a Contra Costa Times article[2] on Oakland’s effort to improve the Coliseum for the Raiders and major league baseball’s A’s, a city-commissioned poll “found that keeping the A’s and Raiders finished last among 20 spending priorities for the 701 Oakland residents randomly polled. Only 7 percent of those polled were willing to pay significantly more to keep the teams.”

Prop. 13’s requirement for a two-thirds vote for local tax increases for a specific purpose was an issue in San Diego. Mark Fabiani, representing the Chargers, accused the city of trying to work around the state law that required a two-thirds vote, thus putting more pressure on the city to somehow fashion a deal both the Chargers and the voters would accept.

The Los Angeles proposals are expected to pencil out without public money because it is believed the teams could raise hundreds of millions of dollars by selling personal seat licenses that allows for the purchase of prime tickets, a formula that is not probable in smaller markets.

While the Los Angeles proposals do not include tax increases, past efforts to fund a football stadium or refurbish the Coliseum in Los Angeles using tax increases ran into plenty of opposition.

In July 1999 I wrote an opinion piece in the Los Angeles Times, “L.A., Say No to the NFL Owners’ Greed[3].” The subheadline was: “No public funds should be expended to bring a football team to the Southland.”

I quoted then-NFL Commissioner Paul Tagliabue from an April press conference, “We all understand the reality of taxes in California since someone named Jarvis came on the national scene.”

He was referring to Howard Jarvis, who led the campaign to pass Prop. 13. And as I noted, “Residual attitudes from the tax revolt Howard Jarvis helped foster have local politicians from the mayor on down declaring that no new taxes will go toward refurbishing the Coliseum for the NFL.”

Fifteen years after that op-ed and, with still no NFL franchise in the country’s second-largest market, the NFL may be willing to back off the demand for public funds to establish a Los Angeles team.