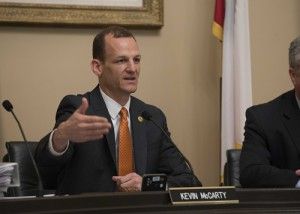 Tuition hikes marched to the head of the class at a recent hearing of California Assembly Budget Subcommittee No. 2 on Education Finance. Assembly members balked at a 28 percent tuition hike [1]advanced by UC President Janet Napolitano and approved by the University of California Board of Regents.

According to the Los Angeles Times, “Neither the governor nor the California Legislature has the authority to force the UC regents to rescind the tuition increase.” However, the tuition hike is not included in the January budget proposal of Gov. Jerry Brown, himself also a regent, for fiscal year 2015-16, which begins on July 1.

Chaired by Assemblyman Kevin McCarty, D-Sacramento, the hearing flunked the UC system for wasteful and deceptive spending practices. A video of the hearing is here[2].

Yet during that same period:

To help pay for UC’s spending increase, tuition increased 84 percent between 2007 and 2011. In Nov. 2014, the UC Board of Regents increased tuition and fees an additional 5 percent annually over the next five years to $15,564 from the current $12,192, pending legislative approval. The compounded increase is 28 percent.

Much of that tuition is supported by state taxpayers in the form of Cal Grants, which have increased from $295 million in 2007 to $882 million currently.

Some of the biggest cost drivers are employee salaries and benefits, retiree benefits and an increase in the hiring of administrators, according to the report:

The UC spending boost, tuition hikes and requests for more state government funding have created pushback in Sacramento. Gov. Jerry Brown[5] and Assembly Speaker Toni Atkins[6], D-San Diego, are both UC regents and voted against the tuition hikes in November.

Brown has offered a 4 percent increase ($119.5 million) in General Fund support for UC. But only if there is no tuition hike, out-of-state enrollment doesn’t increase and UC begins to rein in costs. Brown and UC President Janet Napolitano[7] have been meeting to work out their differences, with a report expected at the UC Board of Regents[8]‘ meeting March 17-19.

At the start of the subcommittee hearing, Atkins emphasized the need for UC to get its spending in order.

“I announced in December that we would be looking at every aspect of the University of California’s budget,” Atkins said. “Every dollar appropriated [should be] spent for the intended purpose and in the right way. We will have open public hearings that are student-focused, looking at how much it really costs to educate students at UC and how we maximize UC’s acceptance of California students. No Californian should be priced out of UC.

“The state must do our best to make higher education a top budget priority. UC must do its part and become more efficient, enroll more Californians and not place increases on the backs of California students. Today marks the start of an overdue journey – a journey that will continue throughout the budget process for as long as it takes.”

Most of the testimony from witnesses at the meeting, with the exception of the UC representative, contended UC is not spending its money wisely or transparently. Paul Golaszewski[9], principal fiscal and policy analyst at the Legislative Analyst’s Office, led off by taking issue with UC’s contention that its professors are underpaid.

“We looked at data on faculty recruitment and retention over a number of years and concluded that it appeared that at the salary levels and the compensation levels they were offering, they had a very low turnover rate for faculty, something like 2 percent a year,” Golaszewski said. “It appeared that they were still able to get the types of faculty that they needed.”

He told the committee that it’s hard to know exactly what UC professors are doing to earn their salaries.

“Faculty workload data is much more difficult to come by,” he said. “We do have data on the student-to-faculty ratio. But that’s not telling you how much faculty are teaching. The University doesn’t track that data, the federal government doesn’t track that data. So that’s an area you might want to drill down and get a better understanding moving on.”

“They are charging undergraduates [tuition that is] almost twice what it actually costs them to provide undergraduate education,” said Schwartz. “That doesn’t sound right. What we face here is not just a UC habit of bad accounting, but a longstanding disease that infects all universities in this country. And this grossly distorts any discussion about student tuition, which is a big thing. People talk about it, but nobody says the truth about what’s going on.

“If you do not acknowledge the cost of that, and go about hiding that cost on the tuition bills of undergrads, this is not right. The challenge I bring to you is what can be done about it. The first thing you have to do must be to resolve the conflict between what I say about UC’s cost structure and what the president’s [Napolitano’s] office says it is. You need to find out which one of us is to be believed.”

“While we support more state investment, it needs to be tied to improved transparency and accountability for how UC spends its money,” said Preparata. “This is particularly true for UC executive compensation and the growth of middle management, both of which have come at a real cost to our employees, students and taxpayers. The lack of transparency obscures a redirection of money that used to fund instruction and other student services to [now] increasingly funding six- to seven-figure salaries and a growing army of middle managers.

“We welcome the Legislature’s increased scrutiny of UC spending alongside a reinvestment in higher education. We believe the scrutiny should not be limited to the explosion of executive compensation, middle management, but also extend to policy directives that have paved the way for decentralizing financial decision making, eliminating transparency and enabling campus administrators to squander scarce resources, including outsourcing of UC career jobs to the lowest bidder with no accountability.”

“It’s a very, very complex budget,” said Nathan Brostrom[12], the UC executive vice chancellor-chief financial officer. He believes UC has been a good steward of its funds. He described how UC has improved its pension system, which had been neglected during the financial crisis.

“First, we started contributions and dramatically increased them,” Brostrom said. “In 2009-10 we contributed zero as a university. This last year we contributed $1.3 billion – 14 percent of our employer contributions. That also couples with 8 percent from each employee. Second, we introduced a new pension tier, which increased the retirement age from 50 to 55 and the maximum age factor from 60 to 65. Finally, we also undertook internal borrowing, $2.7 billion, which has helped leverage and shore up the pension system.

“As a result, we have achieved some good results. We are now 87 percent funded, up from the mid-70s just a couple years ago. But we are bearing this entirely on our own. We don’t get any funding from the state for it, unlike any other state agency or the Cal State system.”

Aggressive efforts have also been taken to rein in health-benefit costs, he said. A new system called UC Care “is centered around our own medical centers to curb the costs and keep it in house,” he said. “We also undertook family member eligibility verification. As a result, we were able to contain the costs to 2.3 percent last year and 5 percent this year. And we are forecasting a 5 percent annual increase going forward.”

UC is also ensuring the continuation of in-state enrollment growth of 1 percent per year, or about 2,200 students, at a cost of about $22 million annually, said Brostrom.

One area that the UC has fallen behind in, due to a lack of funding, is the student-faculty ratio, he said. The ratio has increased to 21:1 from about 19:1 a decade ago.

“We really have not been hiring to replace the faculty members who are either leaving or retiring,” he said. “So there’s a fairly sizable amount that needs to go into new faculty hires. We also want to reinvest in instructional infrastructure, classroom technology and other instructional equipment.”

Brostrom concluded his presentation on an upbeat note. “Something we are most proud of is we are a world class university with very hard working, high achieving students, but we remain accessible to all Californians,” he said. “That’s something we not only maintained but enhanced during the budget crisis.”

Asked about the progress of Brown and Napolitano’s committee meetings, Brostrom said, “It’s been a very constructive process. We’ve been able to hear from experts both within the university and across higher education on different models and ideas. I think there will be things that will be constructive and helpful for the university to serve more Californians. Things that may help us reduce the time to [complete a] degree or increase streamlining of transfers. They may not all lead to cost reductions, but will provide more access to UC for all Californians.”

During the public comments portion of the meeting, numerous students complained about the high cost of tuition. They said it’s forced some students to become homeless, skip meals or work longer hours at a job, shortchanging their studies.

The subcommittee’s next hearing in early March will go into more detail on the UC budget, said committee Chairman McCarty.