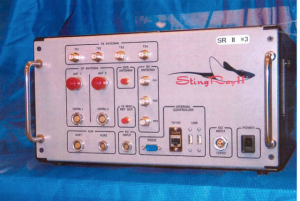 It’s not just the immense amount of information collected by such tech giants as Apple, Google and Facebook that is riling privacy advocates. Now the Santa Clara County Sheriff’s Department is seeking[1] new cellphone surveillance technology — paid for by federal funds from the U.S. Department of Homeland Security.

With time running short on the availability of DHS grant money, and bipartisan support in the U.S. Congress for advancing new phone protections, critics accused Santa Clara County officials of haste and overreach.

Santa Clara County Sheriff Laurie Smith found herself at the center of the dispute, which revolves around her request to the county’s Board of Supervisors for a portable surveillance system commonly known as “Stingray” (pictured above).

According to Ars Technica[2], “The same company that exclusively manufacturers the Stingray — Florida-based Harris Corporation[3] — has for years been selling government agencies an entire range of secretive mobile phone surveillance technologies from a catalogue that it conceals from the public on national security grounds.”

For the Silicon Valley situation, the San Francisco Chronicle explained[4], “The device is said to mimic a cell tower, allowing authorities to track cellphones and pinpoint their location.” Stingray equipment ran a tab of over $500,000 — costs that could be covered by Homeland Security grants acquired by the county two years ago.

Skepticism on the Board of Supervisors has contributed to cops’ sense of urgency. Supervisor Sen. Joe Simitian, a former state senator, told[5] the Contra Costa Times he knew about the potential Stingray deal since December. “I’m a little disappointed if they’re trying to hurry this up because the grant is going to expire,” he said. “It would have been nice to have been told about this a year ago.”

Stingray technology is already used in Alameda County and the cities of San Jose and San Francisco, with agencies around the San Diego and Los Angeles areas also getting into the act. But Simitian has spoken out about the value of more internal deliberation and resident input, criticizing[6] Santa Clara sheriffs for holding a single, brief public meeting on the matter.

Challenges to Santa Clara’s plans haven’t just focused on the technology itself. Although some federal legislators have recently reintroduced a bill designed to bring some constraints to how cellphones can be monitored, for now police departments have enjoyed wide latitude in choosing how to proceed.

In Congress, the Geolocation Privacy and Surveillance Act was recently rolled out[7] by a bipartisan group including Sen. Ron Wyden, D-Ore., and Sen. Mark Kirk, R-Ill. Designed to protect individuals’ cellphones from excessive intrusion by law enforcement or others, the act would require a warrant from police before using technology like Stingray to track locations.

“GPS data can be a valuable tool for law enforcement,” said Wyden in a statement, “but our laws need to keep up with technology and set out exactly when and how the government can collect Americans’ electronic location data.”

Santa Clara sheriffs, meanwhile, have tried to frame their broader approach in reasonable terms. The sheriff’s office announced its intended use of stingray technology “triangulates on a mobile phone only, and does not monitor, eavesdrop, or intercept conversations or data such as texts,” Ars Technica reported[8].

According[9] to the Chronicle, Sheriff Smith tried to emphasize the potential benefits to allowing her office to set limits on its own:

“Smith … said the device will be used only ‘to acquire criminal-activity data to aid in apprehension and prosecution,’ and not to ‘observe community members.’ She said the device could help her deputies — and officers from other nearby agencies — find missing people and victims of human trafficking.

“But the department has no finalized policy for using the technology, and officials do not plan to seek public approval of a policy when it is completed.”

That put California’s longstanding privacy and civil liberty advocates up in arms. “Because Stingrays are capable of dragnet secretive surveillance, they raise serious privacy issues and necessitate robust oversight by citizens, elected leaders and the judiciary,” wrote[10] Matt Cagle of the American Civil Liberties Union. “The ‘just trust us’ approach to surveillance doesn’t cut it, especially when the surveillance is close to home. Yet the public’s ability to learn about and debate surveillance technology should not depend on the good will of law enforcement agencies – it should be incorporated into our democratic processes.”

Pending legislation, however, expectations for change have been blunted by events at the federal level.

As the Wall Street Journal reported[11], for years the U.S. Department of Justice has been using Stingray technology in a once-secret airborne surveillance program.