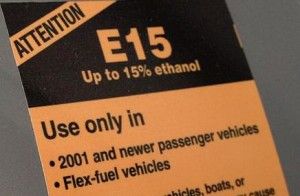 The senator’s website reported [1]yesterday they “are working to repeal a law that drives up the cost of everything from gasoline to groceries. The Feinstein-Toomey Corn Ethanol Mandate Elimination Act of 2015, introduced today, abolishes the corn ethanol mandate in the Renewable Fuel Standard. Sen. Jeff Flake, R-Ariz., is also a cosponsor of the measure.”

The first RFS was adopted as the Energy Policy Act of 2005[2] by the Republican Congress of that day, and signed into law by Republican President George W. Bush. Existing regulations were adopted under the Energy Independence and Security Act of 2007,[3] called RFS2, passed by a Congress that by then had a Democratic majority and signed by Bush.

RFS2 is administered by the federal Environmental Protection Agency. According to the EPA[4], “RFS2 lays the foundation for achieving significant reductions of greenhouse gas emissions from the use of renewable fuels, for reducing imported petroleum, and encouraging the development and expansion of our nation’s renewable fuels sector.”

Although RFS2’s goals seem to jibe with California renewables policies and goals to reduce greenhouse gases, the federal policy has had smoky fortunes in the Golden State. The state passed AB 32, the Global Warming Solutions Act of 2006[5]. To implement AB32, the California Air Resources Board set up standards favoring ethanol of the sort produced in-state because it created fewer greenhouse gases than the type of ethanol produced in the Midwest.

“The Ninth Circuit Court of Appeals issued its decision in Rocky Mountain Farmers Union v. Corey[8], ruling on the constitutionality of California’s Low Carbon Fuel Standard[9].  The Court of Appeals reversed the District Court’s holdings in large part, in particular finding that the LCFS does not on its face violate the dormant commerce clause.”

In 2014, the U.S. Supreme Court declined to hear the case. According [10]to California Environmental Law, “By denying the petition for review, the Supreme Court lends finality to the Ninth Circuit’s decision that the LCFS does not facially violate the dormant Commerce Clause.”

Meanwhile, something else happened in the decade since the 2005 environmental law and the 2007 law. As was indicated by the name of the 2007 law, “The Energy Independence and Security Act,” the use of home-grown grains to produce ethanol was intended to “secure” American “independence” from the vagaries of international energy production, including ongoing wars in the Middle East and disputes with such major oil producers as Russia, Iran and Venezuela.

But the “fracking” boom of the past decade, not only in Texas but in the Bakken Formation centering around North Dakota, vastly has increased U.S. energy production. The BBC reported[11], “The International Energy Agency and oil giant BP certainly … believe the U.S. will be energy independent by 2035.”

“A significant amount of U.S. corn is currently used for fuel. If the mandate continues to expand toward full implementation, the price of corn will increase. According to the Congressional Budget Office, that would mean as much as $3.5 billion each year in increased food costs. Americans living on the margins simply can’t afford that.”

However, the corn industry contends the RFS is good for the economy. According [12]to industry group Fuels America, the Feinstein-Toomey bill “would devastate the renewable fuel industry and the rural communities that rely on it. … The bill would also harm progress on second-generation biofuels, including cellulosic ethanol — the cleanest motor fuel in the world.”

“The RFS is working and has resulted in significant environmental gains. For example, the RFS is America’s only fully implemented policy that reduces greenhouse gas emissions and other pollutants.”

Senators from Midwestern states covered with amber waves of grain and receiving ethanol subsidies remain powerful and also come from both parties.

Keys to watch are what the presidential hopefuls say about the Feinstein-Toomey bill as they campaign in the corn fields leading up to the Iowa Caucuses [14]next Jan. 18.