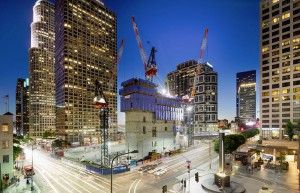 California’s jobs situation continues to improve — although there’s a dip in consumer sentiment.

The California Employment Development Department today announced[1] unemployment dropped to 6.9 percent in February, down from 7.1 percent in Dec. 2014; and down more than a point from the 8.1 percent of Jan. 2014.

But a slight caution comes from the California Composite of Consumer Sentiment released yesterday by the A. Gary Anderson Center for Economic Research at Chapman University. Any score above 100 is considered positive. The Index dropped to 101.2 in the First Quarter of 2015 from 108.9 in the Third Quarter of 2014. 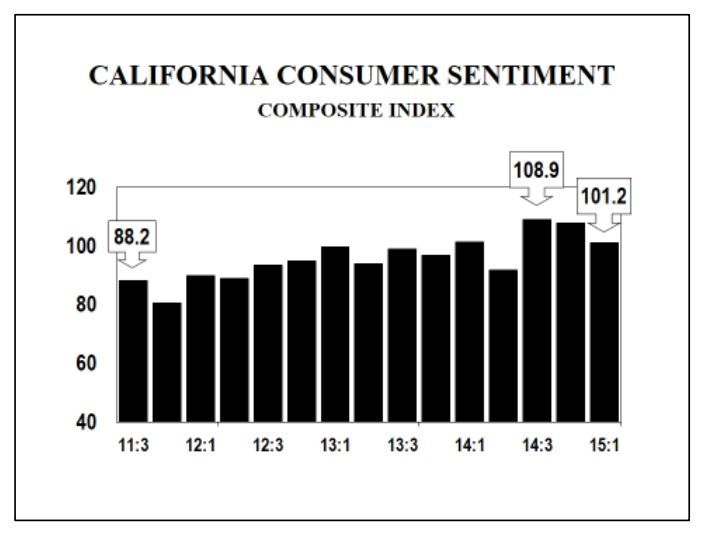 He said the drop in sentiment “was kind of puzzling” in the midst of generally positive news. The survey asks only if things are better or worse, and doesn’t ask reasons.

But Adibi surmises the reason is the recent spike in gas prices has people jumpy. In a month, prices in the state have gone up $1 a gallon.

“Overall I’m not seeing too much into the drop,” he said. “The last four quarters have been good. There’s steady job growth going on. Home prices are up, making homeowners happy. The stock market is up, bringing the ‘wealth effect'” — in which stock owners spend some of their profits on consumer goods. “And mortgage rates are helping financing.”

“Total nonfarm payroll employment increased by 295,000 in February, and the unemployment rate edged down to 5.5 percent, the U.S. Bureau of Labor Statistics reported today. Job gains occurred in food services and drinking places, professional and business services, construction, health care, and in transportation and warehousing. Employment in mining was down over the month.”

It was the best showing since mid-2008, before the financial crisis struck in September that year.

But disappointing was wage growth. Reported [3]the New York Times, “Last month, wages rose just 0.1 percent, according to the Labor Department, a disappointment coming off an increase of 0.5 percent in January.”

Along with Chapman President Jim Doti, every December and June Adibi delivers a forecast [4]of the state and national economies. Adibi gave CalWatchdog.com a glimpse into what the next June forecast will look like — assuming there are no unforeseen events, he cautioned, such as a major war.

Adibi said overall U.S. jobs growth was “steady, but not strong.” So that’s another caution.

He added that lower oil prices have helped the overall European economy, which is much more dependent on imports than the American economy.

“The main worries are with other countries. But we think Europe will do better — except for Greece,” which remains near insolvency. “German exports are strong thanks to the weaker euro, which also helps European tourism.”

In addition to the Chapman survey of California consumer sentiment, Adibi pointed to the similar survey [5]of all America by the University of Michigan. Released Feb. 27, it found:

“The small overall decline from January still left consumer confidence at the highest levels in eight years. It is hard not to attribute the small February decline to the temporary impact of the harsh weather, as declines that occurred in the Northeast and Midwest were triple the average loss, while Southern residents grew more optimistic.”

At least most Californians don’t have to put up with all that snow.