Despite topping polls, Condoleezza Rice not running for Senate 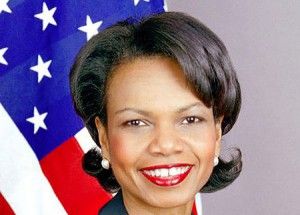 Political pundits and strategists finally are taking seriously that, despite topping polls, Condoleezza Rice is not running[1] for the U.S. Senate. The decision by the former U.S. secretary of state puts California Republicans back on their heels. For the state GOP, the hunt is very much on for a heavyweight who could vault over the Democrats’ field of contenders in the race to replace retiring Sen. Barbara Boxer.

The opening Boxer will create in 2016 has attracted frenetic attention in California. So far Attorney General Kamala Harris successfully has kept competitors in her own party from declaring candidacies of their own. Nevertheless, challengers are expected[2] — especially Latinos from Southern California — and the Republicans to step forward so far face a decidedly uphill climb.

Top Republicans, the Daily Caller reported[3], have shown an interest in Rice since at least January. In what some interpreted as a politician’s act of being coy, Rice permitted her staff to say in mid-February she was staying put in academia. “The poll doesn’t change her position about running for Senate,” Chief of staff Georgia Godfrey said[4] at the time via email. “She plans to stay at Stanford.”

In another disavowal, Godfrey used even sharper language. “It’s not even a consideration,” he emailed[5] The Hill. “She’s happy here at Stanford!”

But in late February, The Hill reported[6], the Black Conservatives Fund tried to nudge her toward the race anyway, distributing a fundraising email to back up the polling with donated cash. The email itself enthused:

“Condi is a true American success story. Her father was a minister. She’s an accomplished pianist, diplomat, and a role model for millions. But the best news of all is that if she runs, she can steal California’s U.S. Senate seat from the Democrats.”

A former provost of Stanford University, Rice has taken on[7] what are now three concurrent titles: Denning Professor in Global Business and the Economy at the Stanford Graduate School of Business; Thomas and Barbara Stephenson Senior Fellow at the Hoover Institution; and professor of political science.

As Reuters reported, a Field Poll released last month showed[8] Rice with a somewhat surprising lead against the entire field of possible candidates to replace Boxer. Rice sat atop the pack with 49 percent support. At the time, the poll listed 18 possible candidates, including some who have since bowed out, such as former Los Angeles Mayor Antonio Villaraigosa.

But it raised hopes for California Republicans. In several election cycles past, they have put their party’s statewide fortunes in the hands of big-name would-be saviors, including Gov. Arnold Schwarzenegger and gubernatorial candidate Meg Whitman, the former eBay CEO who now heads Hewlett-Packard.

On the other hand, enthusiasm for Rice could have been tempered by the state GOP’s track record with star candidates lacking in political experience. Although former HP chief Carly Fiorina has gone on to indicate she might seek the Republican nomination for president, she floundered[9] in her own 2010 Senate bid in California. Whitman’s failed campaign cost[10] her $140 million that same year.

And Schwarzenegger’s tenure in Sacramento was ultimately judged by many in the party to have been more trouble than it was worth. Some insiders viewed it as a squandered opportunity to rebuild the party and anoint a political heir — two items that seemed not to top Schwarzenegger’s own agenda.

With Rice gone, however, the fact remains that the current crop of would-be GOP challengers ranked at the bottom of the Field Poll. Although one poll cannot decide a race before it begins, the results reinforced a solidifying perception that someone of great stature was required to beat Harris.

The Field Poll’s results, for instance, did not even place[11] Fresno Mayor Ashley Swearengin, who last November lost a race for state controller, in the lead among Republicans not named Rice. Swearengin finished with 22 percent “inclined” to support her, just after former state Sen. Phil Wyman, at 24 percent. 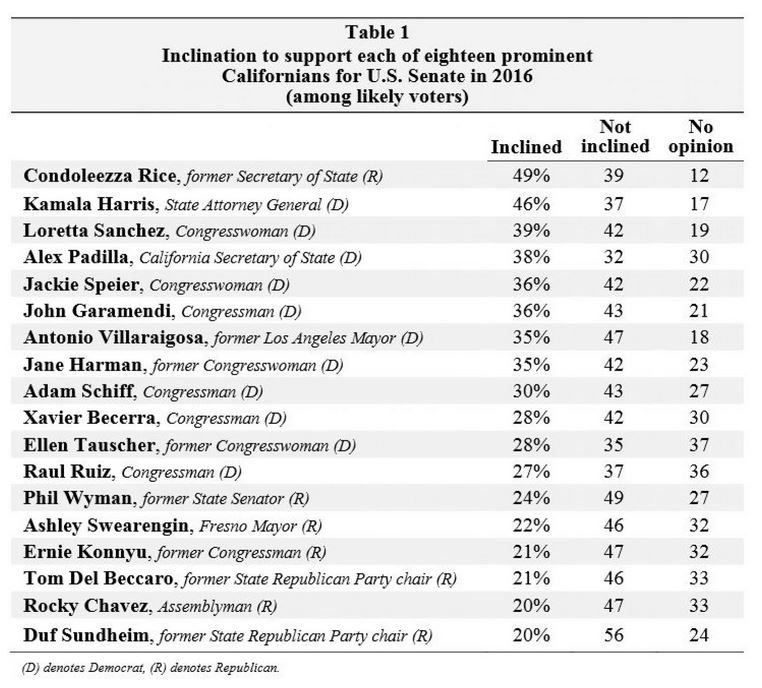