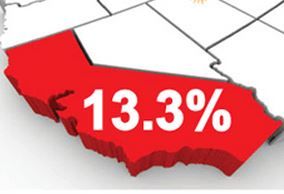 The newest figures just released by the Tax Foundation show California continues to be one of the highest-taxes states in the country. According to “Facts & Figures 2015: How Does Your State Compare[1]?” the Golden State now ranks fourth-highest for taxation. The only states with higher taxes are Connecticut and New Jersey, tied for the highest; and New York in third place.

A big problem was pointed out to CalWatchdog.com by Esmael Adibi, A. Gary Anderson Center for Economic Research and Anderson Chair of Economic Analysis at Chapman University: Three of our Western States competitors make the Top Ten list of the least-taxed states: Nevada in third place, Utah in 9th and Texas in 10th.

Overall, the state with the least taxes is Louisiana, followed by Mississippi, South Dakota and Tennessee.

Adibi pointed out that California’s high rank derives largely from it having the highest personal income tax in the country, 13.3 percent at the top marginal rate after voters passed Proposition 30[2] in 2012. “Prop. 30 really pushed us over,” he said.

He added that, despite the Proposition 13[3] tax limitation measure, California ranked only 14th-best for property-tax collections. If property here cost less, then California would rank much higher. “But property is so expensive, the taxes paid equal the tax rate times the amount you pay for the property,” he calculated.

That’s similar to the finding of CEO Magazine’s survey of CEOs[4], who have ranked California the worst state in which to do business for eight straight years. 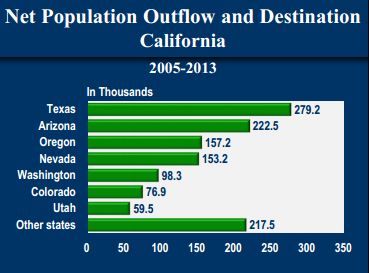 “There’s no question high taxes at least affect some people on whether to stay in California or move to a state with lower taxes,” Adibi pointed out. He provided CalWatchdog.com a chart showing “Net Population Outflow and Destination” for California. “Net” means both those coming into the state and those leaving.

Some other rankings from the Tax Foundation “Facts & Figures”: