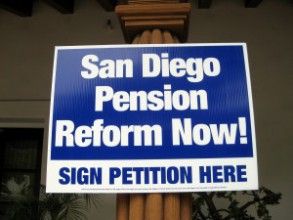 The dynamic duo of California pension reform are teaming up in 2016.

Former San Diego City Councilman Carl DeMaio and former San Jose Mayor Chuck Reed, both of whom successfully passed pension reform in their respective cities during their time in office, announced Wednesday their plans to work together on a statewide pension reform measure for the 2016 ballot. Reformers hope to take advantage of easier ballot measure qualifying rules that require the lowest number of signatures in decades[1].

“Without serious pension reform in California, we face a future of cuts to important services and more tax revenues diverted to unsustainable pension payments,” Reed, a Democrat, said in a press release announcing the effort.

Last year, while DeMaio was preoccupied with his campaign for Congress against Rep. Scott Peters, Reed unsuccessfully tried to qualify a similar statewide pension reform measure[3]. However, that effort stalled during the qualification stage over a dispute with Attorney General Kamala Harris over wording for the title and summary. This time around, he’ll benefit from DeMaio’s experience as a grizzled veteran of ballot-measure shenanigans.

“We have done a lot of legal work to make sure this initiative is bulletproof,” DeMaio, a Republican, told Reuters[4]. “Because the unions are going to throw the kitchen sink at us.”

DeMaio knows full well the extent to which organized labor will go to thwart pension reform. In 2011, he led the effort to qualify San Diego’s Comprehensive Pension Reform measure for the 2012 ballot. The CPR measure forced all new employees into a 401(k)-style plan and capped contribution levels for current employees.

Labor organizers deployed activists to block signature gatherers and frighten potential signatories with misleading claims that signing would put them at risk of identity theft. At the time, longtime San Diego political operative T.J. Zane, who now serves as executive director of the San Diego Republican Party[5], described the San Diego-Imperial Counties Labor Council’s signature-blocking efforts as “unprecedented in its scope and ferocity.”

After the measure qualified for the ballot, San Diego voters overwhelmingly passed Proposition B[6] in June 2012 by a two-to-one margin.

At the same time DeMaio was reforming pensions in San Diego, Reed, then-mayor of San Jose, was leading a similar effort in Silicon Valley. Reed’s Measure B[7] passed by an even larger margin: 70 percent to 30 percent. The Wall Street Journal praised Reed’s efforts and described him[8] as “that rare creature, a Democrat in a liberal bastion who is nonetheless focused on salvaging government finances while inviting the wrath of public unions and their political allies.”

“San Jose’s was the most far-reaching, in that it challenged the core obstacle to serious pension reform in California,” Steven Greenhut, one of the state’s leading experts on pension reform, wrote at City Journal[9]. “But a Santa Clara County Superior Court judge gutted the reform measure, saying San Jose could cut its employees’ pay, but not their pension benefits.”

Even after the negative court rulings, Reed’s successor has begun to further distance the city from Measure B[10] in a bid to make “peace in the city’s pension wars.”

The proposed statewide pension measure for 2016 already has received some harsh criticism as the work of two washed-up politicians.

In anticipation of push-back from local governments, state pension funds and organized labor, Reed and DeMaio have made it a point to build a broad-based coalition that sets aside their different political parties.  The coalition also will include David Grau[12] of the Ventura County Taxpayers Association. Last year, after collecting thousands of signatures, Ventura County’s pension reform proposal was removed from the ballot, according to CalPensions.com[13].

“CalPERS has dedicated itself to preserving the status quo and making it difficult for anybody to reform pensions,” Reed recently said of the effort[14]. “This is one way to take on CalPERS, and yes, CalPERS will push back.”