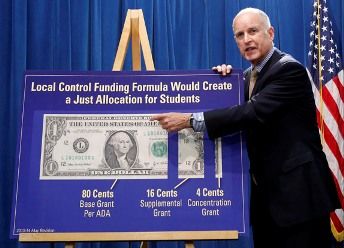 The Local Control Funding Formula, enacted in 2013, is supposed to make sure more education dollars are used in ways that specifically help struggling students. Gov. Jerry Brown pushed for the education funding change because he said it was crucial to making millions of mostly minority students into productive citizens helping the California economy. Reformers saw the law[1] as “a historic investment in high-need students.”

However, the Legislative Analyst’s Office surveyed 50 school districts around the state, including the 11 largest, and warned in a January report[2] that not one had proper safeguards to prevent diversion of funds. In Los Angeles Unified, among other districts, the local teachers’ union last summer pointed specifically[3] to new, incoming LCFF dollars as a kitty to tap for pay raises.

In coming months, this issue is likely to emerge as a point of contention in Sacramento because of concerns raised by the California Legislative Black Caucus[4] about State Board of Education rules governing how LCFF funds are used. Here are three of the caucus’ main points:

— The terms “most effective” or “effective” should be defined, and at a minimum be tied to demonstrated effectiveness in meeting the “student achievement” goal and closing any persistent achievement gaps or deficiencies as it relates to the unduplicated students, and not just a generic reference to the state priority areas.

— The proposed regulations also do not provide the Board or county superintendents clear standards by which districts must explicitly demonstrate or explain, at a minimum, how expenditures of supplement and concentration grant funds will support services that will actually improve the academic achievement of unduplicated students or close persistent academic achievement gaps.

These concerns are from Assemblywoman Shirley Weber’s remarks to the State Board of Education at its Jan. 16 meeting on behalf of the Black Caucus.

Dan Walters wrote a Feb. 26 column[5] in the Sacramento Bee noting that a “broad coalition of civil rights and education reform groups” had expressed worry about the LCFF not being implemented according to the goals cited in 2013 upon its passage. But this effort seems likely to be much stronger with the aid of state lawmakers.