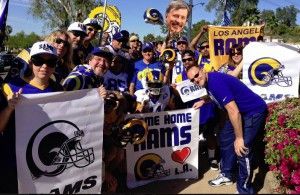 At a high-profile Phoenix, Ariz., gathering this week, NFL heavyweights sat down[1] to smooth out the road toward a two-franchise deal in Los Angeles.

Numerous competing and conflicting agendas have made life more difficult for the teams, owners, cities and league officials involved in the maneuvering. But the potential payoffs of a two-team solution remained high enough to make the effort worthwhile.

Unlike the potentially costly and burdensome deals that expansion teams must often rely on, the promise of a return to L.A. was fueled above all by the willingness of St. Louis Rams owner Stan Kroenke to bankroll a so-called “two-team compliant” stadium complex on his own, without relying on public funding.

After a several-month stretch that surprised observers with its unpredictability, the many moving parts of up to three potential team relocations have begun to settle into place. Advancing the latest round of progress, Kroenke revealed he would present to the owners a stadium plan to accommodate two teams.

Presumably, those teams would be his Rams and one of either the San Diego Chargers or the Oakland Raiders.

As the Los Angeles Times reported[2], Kroenke’s willingness to deal another franchise into his own stadium created a way to break a complex logistical and political logjam:

“Kroenke doesn’t need to partner with another team to finance the stadium, but the NFL sees L.A. as a two-team market and wants venues to be capable of hosting both. The Inglewood plan is two-team compliant, which means it has two home locker rooms, identical sets of office space, and two owners’ suites. Whereas the Carson proposal is based on the Chargers and Raiders simultaneously relocating, it is widely believed Kroenke does not want to share the market with another NFL team right away, and, because he would be assuming the risk of the stadium by himself, would want to reap the benefits of getting his team up and running as L.A.’s sole franchise.”

While Kroenke would benefit from the profit and publicity granted by a season or more as the only game in town, the NFL would benefit from a different kind of running room. In the run-up to the owners’ meetings, league officials reiterated their concern that the cities of San Diego, Oakland and especially St. Louis be given the opportunity to make their best good-faith efforts to appease their teams and broker deals to keep them from relocating to L.A. (or elsewhere).

As ESPN reported[3], NFL Commissioner Roger Goodell explained the league’s “first objective will be to make sure that those markets have had the chance to get something done — that they can get a stadium built to secure the long-term future of their franchise.” He continued:

“San Diego has been working 14 years on a new stadium. Oakland is not in a new debate either, for the A’s or the Raiders. Same with St. Louis. … These are long debates about what is the right solution for the community and what is best for the team. We’re looking to see if we can create those solutions locally. If we can’t, we obviously have to look at long-term solutions for those teams.”

Last month, the Chargers and Raiders called[4] an unexpected audible, introducing an independent joint plan to partner up for a stadium deal in Carson, north of Long Beach. That created a potentially powerful alternative to Kroenke’s plan in Inglewood.

But the Chargers/Raiders plan, unlike Kroenke’s, required the teams and the league to get bogged down in the ins and outs of the municipal budget — a big turnoff to an NFL hoping to reach a new status quo with a minimum of upset.

Try as it might, however, the NFL has been unable to impose its own strong preferences on the situations surrounding L.A. football. The NFL’s owners themselves have proven far more enthusiastic about pushing ahead with L.A.

A handful of key owners, who recently formed a new Committee on Los Angeles Opportunities, have raised the prospect that the best way to move forward could touch off a chain reaction of moves that would surprise fans but satisfy most key interests.

“One of the 10 to 12 scenarios being looked at by the league is particularly intriguing: The Rams go to L.A., the Raiders replace them in St. Louis and the Chargers remain in San Diego. The Rams would get a head start as the first team in L.A. (a reward for Kroenke’s investment), the Raiders would get a fresh start in a new stadium and the Chargers would potentially be able to jump-start their efforts to build in San Diego, with the city knowing the team could join the Rams in Inglewood.”

Complex as it may be, the kind of multi-step play forged in Arizona could draw the shortest line yet to L.A. football.