Why “June gloom” is now less common in Socal 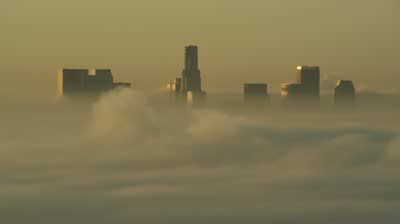 Foggy conditions from late spring to late summer used to be so common in coastal Southern California that they had their own sobriquet: “June gloom.” Fog-related traffic accidents and deaths were fairly common on the Pacific Coast Highway.

The weather phenomenon wasn’t strictly along the coast. Dodgers Stadium, 16 miles from the Pacific Ocean, could be a gloomy place to watch a day game. In San Diego, fog could get so heavy on State Route 163 east of Miramar Air Base — 10 miles inland — that cars would have to pull off the road.

But such fog is more rare nowadays. A study released this month[1] documents and explains this change:

Summertime fog that helps keep coastal Southern California cool and damp appears to be melting away, and scientists who have documented nearly 70 years of its decline think they can explain why: concrete.

The urban heat island effect[2], the phenomenon of cities warming faster than surrounding countryside, is a main culprit for a two-thirds reduction in the number of foggy mornings in Los Angeles since 1948 … .

When dense stratus clouds that blanket the eastern reaches of the northern Pacific Ocean roll over Los Angeles and San Diego, they tend to keep low to the ground, manifesting in some areas as fog. That fog quenches rain-starved woodlands and grasslands and acts like sunscreen for buildings and landscapes. That helps coastal Southern Californians save energy on air conditioning during summer. It also sustains native ecosystems and it reduces the region’s notorious wildfire risks.

After analyzing reams of data on summer cloud heights at 24 airfields near the coast, a group of researchers led by Columbia University on Thursday became the latest[3] to describe a decline in fog levels along the Californian coastline — and the first to link such declines with the urban heat island effect. (Other research has demonstrated the effects of ocean cycles[4] on fogginess.) The new study focused on the warmest months, when the fog is most prevalent and most influential.

The researchers detected changes in the heights of clouds’ lower levels, concluding that they’re being pulled up to higher altitudes. The changes were linked to rising temperatures in cities. At these higher altitudes, the clouds are no longer experienced as fog, nor do they serve all of fog’s cooling functions. Higher-altitude clouds also risk being squeezed out of existence by atmospheric forces, allowing the sun to shine more intensely over the landscape.

The summertime fog trends were found to be strongest in the early morning. The frequency with which Los Angeles was fogged over at 7 a.m. declined by 64 percent between 1948 and 2014. Declines in San Diego were less pronounced, yet still statistically significant.

That summary of the study is from the Climate Central website.