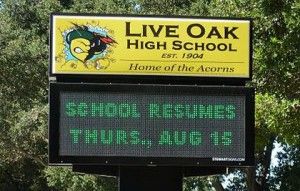 After five years of controversy and litigation, the U.S. Supreme Court let stand[1] one of the most controversial rulings to come out of the 9th U.S. Circuit Court of Appeals.

Known for how often it is overturned in the higher court, the 9th Circuit sided last year against California high school students who claimed their freedom of speech had been infringed. Wearing American flag shirts in the midst of school Cinco de Mayo celebrations, they were confronted with threats of violence. To defuse the situation, administrators required[2] some students either to turn their shirts inside out or go home.

Writing for the panel, Judge M. Margaret McKeown denied the court’s role was to “second-guess the decision to have a Cinco de Mayo celebration” or to question “the precautions put in place to avoid violence.” Given past tensions between white and Hispanic students, “it was reasonable for school officials to proceed as though the threat of a potentially violent disturbance was real.”

Supreme Court watchers had expected polarized reactions if the court chose to take up the case. But it opted to let the 9th Circuit’s decision stand. As is customary, the court declined to explain its choice.

But the particulars of the case may have contributed to that decision. All the student plaintiffs have graduated from Live Oak High School, located in Morgan Hill. According[4] to the Los Angeles Times, the school’s former principal retired and recently died of a heart attack.

But, as the Times noted, even though no new precedent has been created, the Supreme Court’s punt on the issue left open “questions about whether students have meaningful free-speech rights on matters that may provoke controversy.”

What analysts do know is the court lacked enough support to reconsider the 9th Circuit’s reliance on Tinker v. Des Moines Independent Community School District[5], a 1969 case that established guidelines for when schools could cramp free speech out of a concern for students’ physical safety.

“The Supreme Court would have had to revisit the precedent to take the case,” the San Jose Mercury News observed[6]. Steve Betando, superintendent of the Morgan Hill Unified School District, drove that point home in a statement. “This case has never been about the American flag, which Live Oak proudly flies above our school every day,” he said, according to the Mercury News. “This case has always been about protecting the safety of students.”

Although the facts of the case have contributed to California’s ongoing culture battle over identity politics, the principles at stake drew the First Amendment sympathies of an ideologically united front of constitutional scholars. Republican legislators and conservative activists dominated last year’s unsuccessful push to get the 9th Circuit to re-hear the case.

In the wake of the plaintiffs’ defeat before the 9th Circuit, Volokh himself had cautioned[8] the Tinker decision constitutionally could protect what many critics of the ruling called outright bullying and intimidation:

“This is a classic ‘heckler’s veto’ — thugs threatening to attack the speaker, and government officials suppressing the speech to prevent such violence. ‘Heckler’s vetoes’ are generally not allowed under First Amendment law; the government should generally protect the speaker and threaten to arrest the thugs, not suppress the speaker’s speech. But under Tinker’s ‘forecast substantial disruption’ test, such a heckler’s veto is indeed allowed.

“The 9th Circuit decision may thus be a faithful application of Tinker, and it might be that Tinker sets forth the correct constitutional rule here. Schools have special responsibilities to educate their students and to protect them both against violence and against disruption of their educations. A school might thus have the discretion to decide that it will prevent disruption even at the cost of letting thugs suppress speech.”

Until that kind of fact pattern comes before the Supreme Court again, California parents and students will have to brace themselves for just such an outcome.