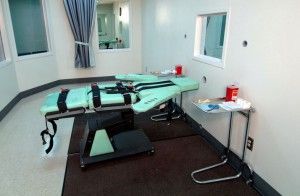 Litigated to all but a halt, California’s system of capital punishment has backed up to crisis levels, filling[1] death row to capacity and prompting an emergency proposal from Gov. Jerry Brown. Nine years after California’s last execution, the system’s near shutdown has become national and international[2] news.

“Warning that there is little time to lose,” the Los Angeles Times reported[3], “Gov. Jerry Brown is asking the California Legislature for $3.2 million to open nearly 100 more cells for condemned men at San Quentin State Prison. The proposed expansion would take advantage of cells made available as the state releases low-level drug offenders and thieves under a new law voters approved last year.”

The law, on the ballot as Proposition 47[4], has made a significant impact on the California prison system already, dropping[5] the number of felonies in state by some 40,000.

According to the Times, Brown’s bid was slated for a subcommittee hearing next month chaired by state Sen. Loni Hancock, D-Berkeley.

“California is in a Catch-22 situation,” she said in a statement provided to the Times. “We are required by the courts to address prison overcrowding and we are required by law to provide certain minimum conditions for housing death penalty inmates. The Legislature can’t avoid its responsibilities in these areas, even though the courts are currently considering the constitutionality of the death penalty, and I hope will agree to end it.”

The Golden State’s death row has become the country’s largest, as KCRW reported[6], thanks to the uncertainty created by the judiciary:

“The capital punishment system has been in limbo since a court invalidated the state’s three-drug lethal injection system nearly a decade ago. No new protocols have been developed. Meanwhile, another judge has questioned the constitutionality of California’s capital punishment system. That judge ruled last year that the appeals process here takes so long that executions have become random.”

In that case, decided[7] last year, Judge Cormac J. Carney wrote that “the execution of a death sentence is so infrequent, and the delays preceding it so extraordinary, that the death penalty is deprived of any deterrent or retributive effect it might once have had. Such an outcome is antithetical to any civilized notion of just punishment.”

On appeal, the case would go before judges on the U.S. Ninth Circuit Court of Appeals, considered the most liberal in the country.

For Brown, the ordeal was just the latest in a string of severe frustrations and challenges meted out by state and federal judges. Through his controversial policy of “realigning” inmates from state prison to county jail, Brown was able to meet court standards applied to a degree of overcrowding that was held unconstitutional.

As CalWatchdog.com previously reported[8], however, the passage of Prop. 47 made all the difference. By turning many felony drug possessions into a misdemeanors, and decreasing penalties and sentences for other crimes, Prop. 47 prevented the prison population from rising above the court-ordered cap.

California’s prisons and jails have been plagued with difficulties since the implementation of realignment, however. One result[9] has been a “revolving door” effect, where inmates hit the streets before time served, commit subsequent crimes, then return to the system.

Although Brown has struggled to satisfy activists to his left on prison issues, the controversy surrounding California’s frozen capital punishment system has increased the likelihood that voters and officials simply will seek to scrap it altogether.

In a sign of California’s role as a national bellwether, widespread criticism of lethal injection drugs led the American Pharmacists Association officially to discourage[10] members from providing those drugs, an announcement made this week at its annual meeting in San Diego. As lethal injection has lost its former cachet as a humane alternative to other methods of execution, the prospect of a replacement method in California has faded.

With Sacramento legislators in a hurry to fund Brown’s request, but shut down the state’s death row pileup, pressure likely will increase on the courts to release California from the obligation of keeping the system running at all.