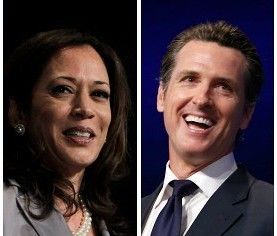 It shouldn’t have. Multiple indicators have suggested both Harris and Lt. Gov. Gavin Newsom — the perceived rising stars of the California Democratic Party and the frontrunners to replace Sen. Barbara Boxer and Brown, respectively — want no part of the controversy-plagued $68 billion project.

In fall 2013, the attorney general declined to appeal a Sacramento Superior Court ruling that held the state could not begin spending state bond funds on the project until it had adequate financing and sufficient environmental reviews for the first 300-mile link of the project. Harris’ office filed a “remedies brief” responding to the ruling with no remedies. Instead, the brief argued it was premature[2] to block the project — not that the judge was wrong about its fundamental inadequacies.

This led to an appellate court ruling that allows the state to keep spending federal funds and some state dollars for now but eventually will require the High-Speed Rail Authority to identify $31 billion in funding and to complete hundreds more environmental surveys than it’s managed to complete to date before it begins major construction.

Newsom’s objections to the project don’t stem from its legal issues. The former San Francisco mayor’s reservations pertain to financing. This is from his interview[3] with the L.A. Times in February 2014:

He thinks the bullet train’s financing is too risky and would drain money from other, more necessary infrastructure projects such as roads, transit and waterworks. …

Voters in 2008 authorized $9 billion in bonds to begin building a 500-mile high-speed rail line from Los Angeles to San Francisco, with later extensions to San Diego and Sacramento. That L.A.-San Francisco first phase was to cost $33 billion. The federal government and private investors, voters were told, would kick in the rest of the money.

But the state received only $3.3 billion from the feds and have repeatedly been told by Congress that there’ll be no more. Private financiers haven’t put up a dime. The projected cost has more than doubled to $68 billion. …

Says Newsom: “You’d be hard pressed to find a bigger champion of high-speed rail than me when the bond went to voters. I believed in it. But my current problem with it is the financing. I can’t in good conscience square what I was supporting then with what we’re doing today.”

He says Brown is confident the project eventually will attract private investment. “If so, that changes the game.”

“But absent something significant — and I mean, really significant — I can’t see supporting something that would come at such a high cost to other infrastructure. I don’t see how we could go forward. There’s got to be a different financing plan. Without it, the math doesn’t add up.”

Will governor call them names, too?

Brown’s go-to response has been to depict critics as people who are scared of change. In January, he said were they around when the Golden Gate Bridge was being built, they would have objected[4] to that project as well.

But while Newsom’s general objections have been on the record for 14 months and Harris’ legal concerns have been on view for 20 months, the governor hasn’t commented on them specifically — preferring to speak broadly of bullet-train foes as “declinists.”[5]